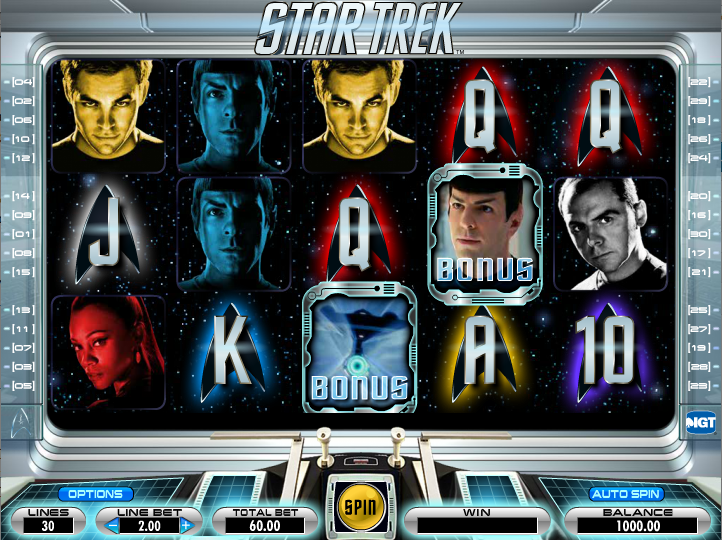 There are more than a few Star Trek-themed online slots and there’s nothing wrong with that – the classic television show and the movies offer lots of scope for interesting features and clever graphics and Star Trek from IGT is no exception. It’s based on the more recent films and therefore the characters are played by the newer crop of actors and actresses including Simon Pegg, Zachary Quinto, Chris Pine and Zoe Saldana.

Star Trek features five reels and thirty paylines and those reels are set against a window of the Starship Enterprise so we can see out into the starry depths of space. The main characters – Captain Kirk, Spock, Scotty, Uhuru – are the major symbols and the minor ones are Federation badges featuring 10, J, Q, K and A.

There are four bonus games in Star Trek, each based on one of the four main characters.  It’s triggered by landing two standard bonus symbols on reels two and three plus a character bonus symbol on reel four.  Each game will feature some slightly altered reels to reflect that character. To being with you will be asked to choose one of three transporter pads which will determine the nature of the bonus and the games are as follows:

Landing the Kirk bonus will initially reward you with between three and six spins at a 3x multiplier but on each spin you will get to continue and until it wins.  So on spin one, keep spinning until you get a winning combination.

Spock will award between ten to fifteen free spins with wild Spock symbols on the reels; additionally the Kirk symbol is worth double if it makes a winning combo.

This bonus will give you between six and twelve spins but there’ll be extra scatter symbols on the reels to help you win more money.

Scotty will win you ten free spins with a 2x – 5x multiplier but the good news is that after five spins your multiplier will double.  You can see this in action in the video below.

Star Trek fans will love this slot; each spin will exhort you to ‘Live Long And Prosper’ as the dramatic music plays in the background.  Some top notch graphics and four different bonus features should make this a slot you’ll return to regularly.