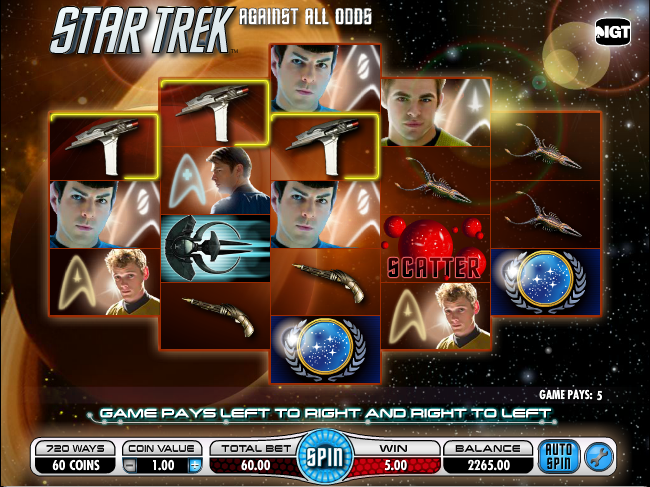 Following the release of another Star Trek movie it naturally follows that we’ll see another Star Trek online slot machine and that’s the case with Star Trek Against All Odds from IGT.  The most recent movie may have been called Star Trek Into Darkness but we don’t care about that, we just want a slot for the Trekkies out there.

This new slot is unusual in that, as you can see from the screenshot above, the centre reel of the five has five symbols, reels two and four have four and reels one and five have just three.  It might not make much difference to any potential winnings but it adds a bit variety.

As the slot is based on the most recent film it also features those characters with whom we are all familiar and so we have Captain Kirk, First Officer Spock and Doctor McCoy among others.  Other symbols are accessories such as a phaser, a tricorder and the Federation logo.

Special symbols are a red planet scatter, a wild helpfully labelled ‘Wild’ and a the Romulan ship which activates the main bonus feature.

The Energizing Wilds are a randomly awarded bonus and what you’ll see is a target appear on the reels.  This target moves around on the centre three reels and turns between two and five symbols wild.  The last spin is re-evaluated to include these wilds and this can be a pretty profitable reward.

This is IGT’s variation on the standard payline and it means you can win prizes as long as matching symbols are  in adjacent columns.  In our experience you tend to get more wins at a slightly lower value.

This is where the action is and it’s refreshing to play a bonus feature where you actually have to interact with the game. To trigger it you have to land five of the Romulan ship symbols on the reels. For 45 seconds you have to defend yourself against Romulan missiles by using the mouse cursor.  Targets are worth either 100 or 500 points and your total score will decide what rank you obtain as follows:

You then spin one of nine wheels to learn your award!

This is a fairly action-packed slot with lots of winning opportunities and an interactive bonus game; free spins enthusiasts might bemoan the lack of that particular feature but it’s not really a problem.  The high quality graphics and sound effects add to what is a really good game.