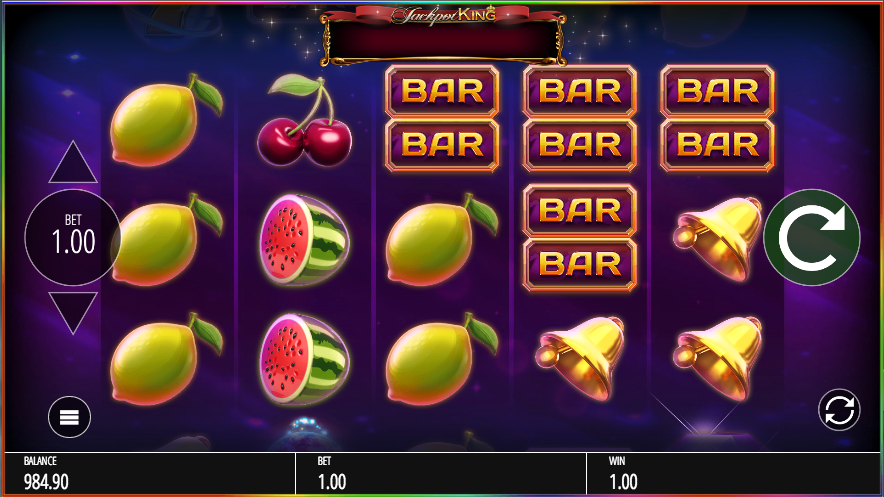 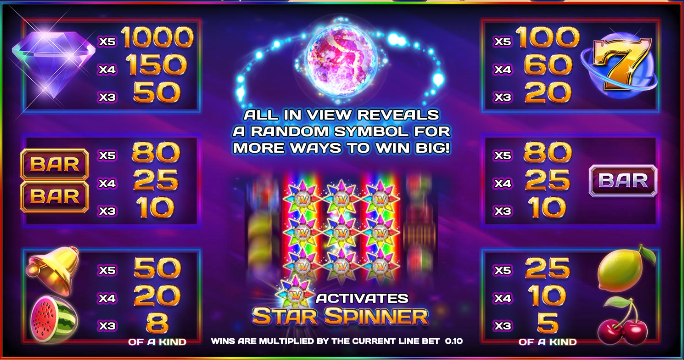 The name of this online slot machine conjures up an image of heavenly bodies making their way through the solar system and that’s not far from the truth although it’s fruit which is being flung around the universe instead. This is Star Spinner, it’s developed by Blueprint Gaming and it comes with a bonus feature and a progressive jackpot to enjoy.

Star Spinner is a five reel slot with three rows and ten fixed paylines; the symbols spin on transparent reels behind which there’s some hazy blue movement and some stars twinkling behind the jackpot total.

The higher value symbols include a huge, purple diamond, double bars, a golden seven, a bell and a single bar; watermelons, lemons and cherries make up the lower values.

The multicoloured star is wild and it will replace all others to form winning combinations except for the pink planet bonus symbol. Both activate their own bonus features.

The wild star appears on reels two, three and four and if one or more lands this feature is triggered; each one will expand to cover all positions on it’s reel and you’ll receive a free repins while they remain locked in place. Any new wild stars landing will repeat the process so there’s maximum of three free respins available here.

The pink planet is the Mystery Symbol and if it lands it will transform into any of the other symbols to try and help out with a winning combination.

Super Spinner is connected to Blueprint’s Jackpot King progressive jackpot network and to trigger it you will need to land five of the Jackpot King symbols on reels one to five. You now get to spin a separate set of reels to collect crowns to work your way up the ladder (15 means you make it to the Wheel King). Spinning the Wheel will award a large bet multiplier or the progressive jackpot.

Star Spinner is a big, bold slot with plenty of action on the reels and the Star Spinner bonus which seems to trigger quite regularly; chuck in a progressive jackpot and what’s not to like?