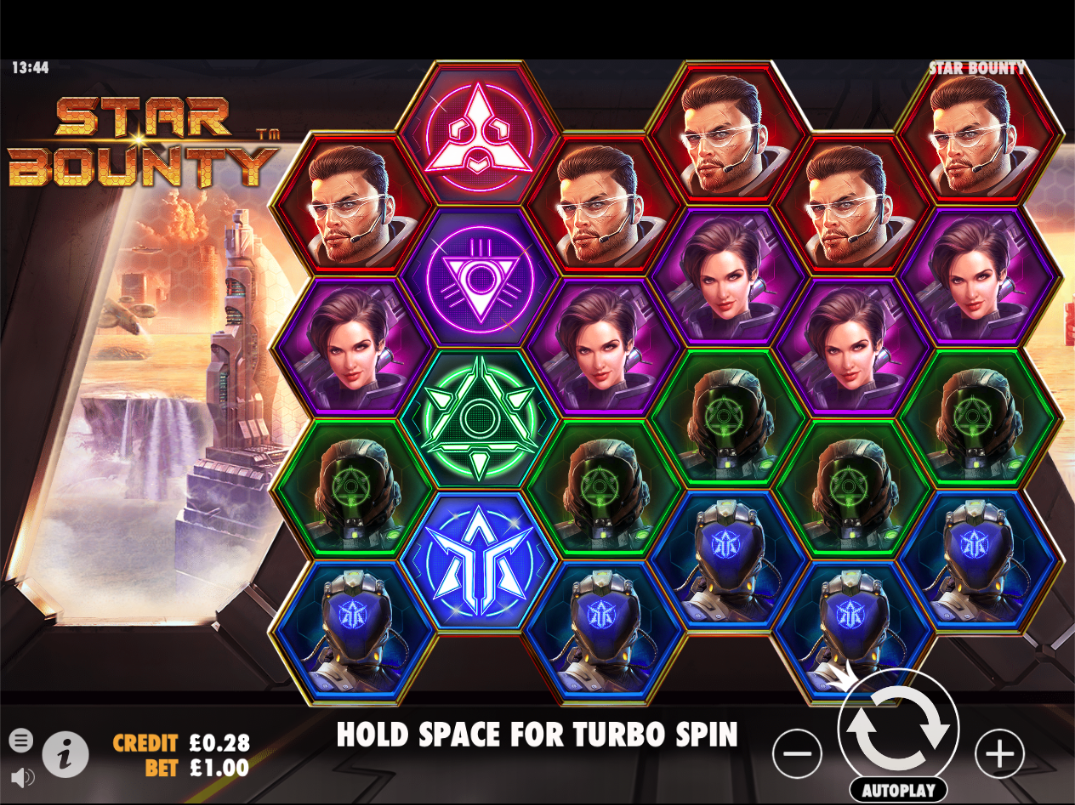 If you’re looking for an online slot set on a distant, futuristic planet then Star Bounty may be right up your black hole; it’s a science fiction-themed game from Pragmatic Play which tempts players with tumbling reels, free spins and the Missile feature.

Star Bounty is a six reel slot with four rows and 4096 ways to win; those reels obscure our view of this alien planet which we’re viewing through the window of some spacecraft.

High value symbols include the male and female characters and two humanoids in blue and green; the medium values are spacey shapes in red, purple, green and blue while the lower values are J, Q, K and A in similar colours. The golden ‘Wild’ is wild, it appear everywhere except for reel one and it will replace all standard symbols; the Free Spins icon is the scatter.

Always a favourite of ours, this sees symbols in winning combos disappear and be replaced by more falling in from above; more combos can then be formed which will continue the process.

The missile symbol only appears on reels two, three and four and when it lands it will transform a random number of other symbols into wilds.

This feature is kicked off by landing at least three of the Free Spins scatter symbols anywhere in view; the next stage keeps this symbols locked in place for a respin in which more Free Spins icons may land – if they do then those lock in place also and there’s another respin; this continues until no new Free Spins land.

The number of Free Spins symbols on the reels is the number of free spins you’ll receive in the next stage – the maximum is twenty four.

If you’d like to dive straight into the free spins round then it’s available to purchase for the bargain price of 75x the stake.

We like Pragmatic Play slots and Star Bounty probably demonstrates why; it’s got all the things we like – tumbling reels, free spins and a refreshingly high RTP of 96.60%. Don’t hesitate to make this journey across the stars.