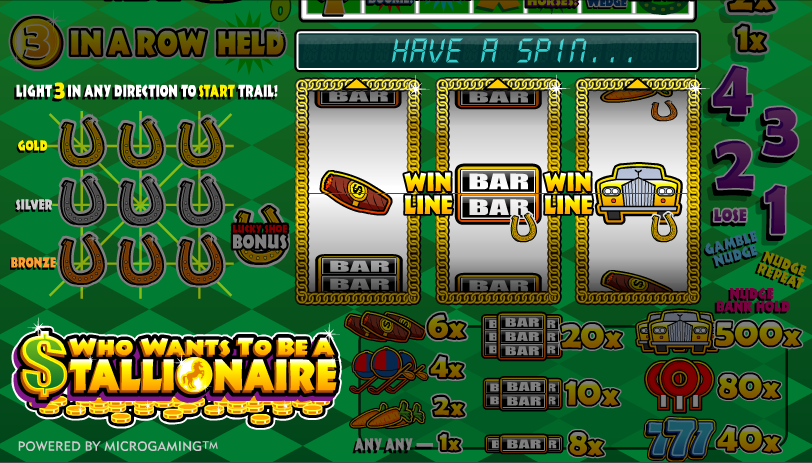 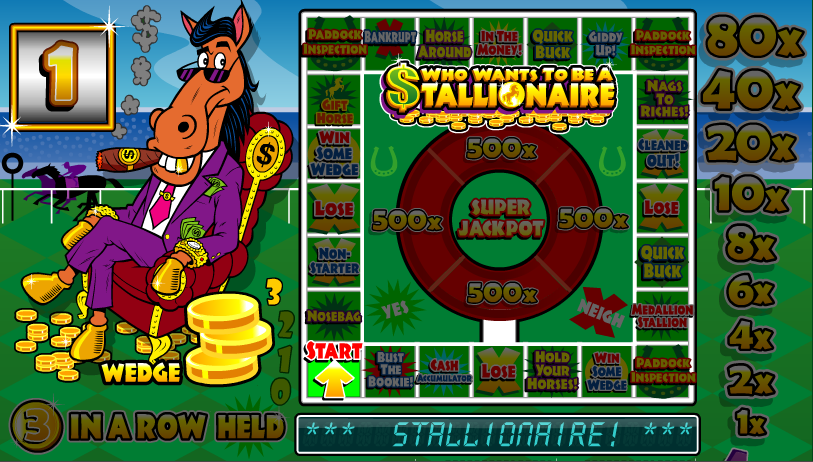 It’s time for a day out at the races and while we’re there why not check out this equine-themed online slot from Microgaming. It’s one of their fruit machine-style slots which attract so many UK players and this one combines the horsey theme with huge piles of money. Read on for more information.

The fill title of this game is Who Wants To Be A $tallionaire with that ‘S’ replaced by an all-important dollar sign. It has three reels and one payline and a green diamond patterned background reminiscent of a jockey’s silks.

Most of the symbols are related to the theme and so we have some cigars, a helmet and whip, carrots, bars, sevens, finish posts and Rolls Royces.

Some of the symbols on the reels also have bronze, silver and gold horseshoes attached and if you can land them on the payline they will light up the appropriate horseshoe spaces to the left of the reels. Light three in a row in any direction and the bonus game will begin.

You will now get to play a board game where you spin the counter and move around the squares, aiming for the biggest bonus prize possible. Each time you land on a bonus square you will lose one of you wedge coins (you start with three) and if you run out it’s game over. There are also spaces with a red cross which will end your game prematurely but others which will refill the wedge meter.

There’s s top prize of 500x your line stake for the luckiest players.

Nudges are awarded randomly and let the player jog single reels down to try and make winning combos or collect some horseshoes, They can also be gambled, repeated or banked.

Holds are also awarded randomly and allow the player to freeze certain reels in place and spin the rest to try and match symbols.

The feature is the big draw here and it’s quite easy to trigger using nudges and holds but hard to win lots of money at. Rarely will you get round the board more than once so take your bonuses as they arrive.

We always like these games and the bonus feature here is just the right side of hard to make you want you to continue playing. The theme is an amusing one too.