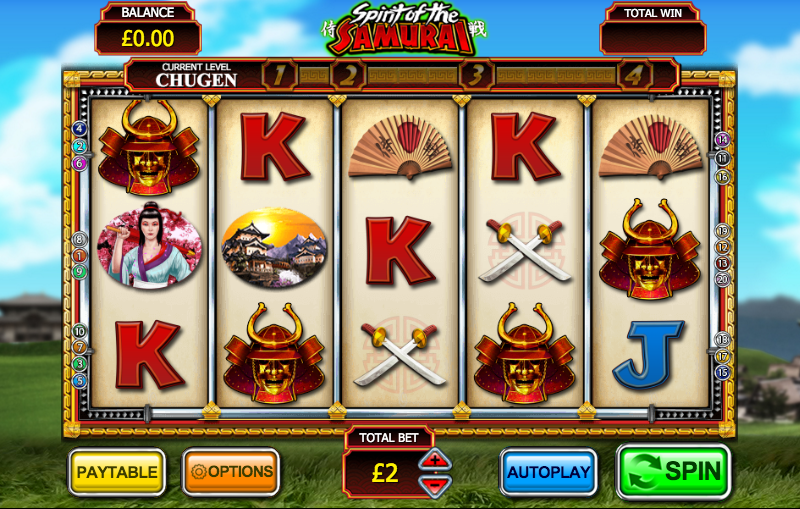 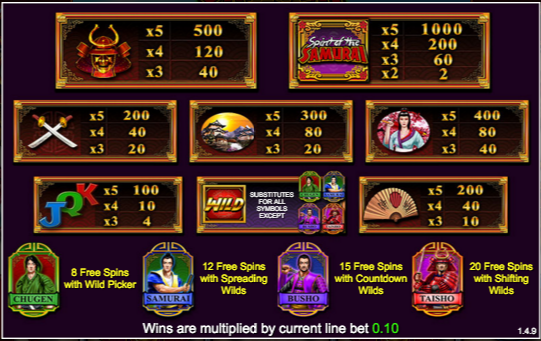 Japanese samurai hold a popular place in modern culture and it’s possible to date these feudal warriors back almost 1000 years; the good news for online slots fans is that they can also provide an exciting theme for games such as this one from Inspired Gaming. It’s called Spirit Of The Samurai and it includes a levelling up element of the bonus feature which you can read about below.

Spirit Of The Samurai is a five reel slot with three rows and twenty fixed paylines; the ornate reels are set against a hazy vision of rural Japan with traditional buildings under a blue sky.

There are six theme-related symbols which include a samurai mask, the game’s logo, a pair of swords, a sunset, a geisha fan and a traditional fan; J, Q and K are the lower values.

The wild symbols is a big gold ‘Wild’ on a red background and it will substitute for all others except the bonus symbols – they are represented by four samurai as described below.

Above the reels you will see that a small notice says ‘Current Level Chugen’, Chugen is the name of the first level samurai and the bonus feature is triggered by landing three of his symbol anywhere on the reels. Triggering the bonus multiple times opens up new samurai with different bonus features:

When you’ve reached level four you can select which of the free spin options to play when the bonus is triggered.

If you land just two free spins symbols there’s a chance that a samurai will appear and slash the reels, respinning one in the hope of landing a third bonus icon.

After any spin there’s a chance a samurai will gallop across the screen on a horse, turning several symbols wild.

Spirit Of The Samurai has loads to offer and is well worth checking out; the longevity is provided by the levelling up feature and this could be the best samurai-themed game we’ve played. There’s an RTP of 95.00%.