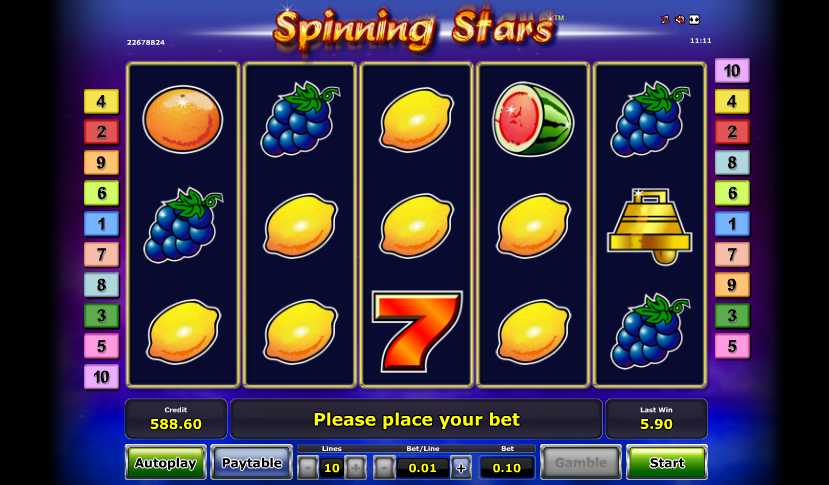 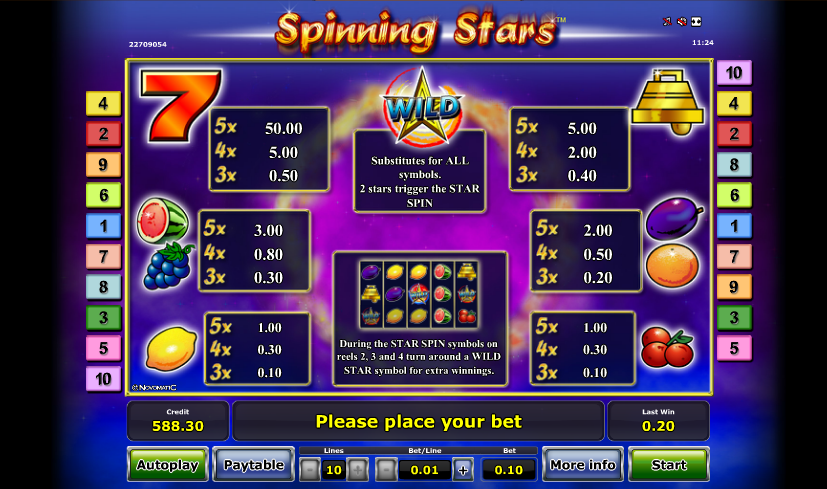 Novomatic are a slot manufacturer with a great track record of developing games of a certain style; in general they are simple to play and understand and popular with a certain type of player. The bricks and mortar casino machines play in exactly the same manner as the online conversions and this is also the case with his new release, Spinning Stars.

Spinning Stars is a five reel and ten payline game with the same type of basic graphics as many other Novomatic slots. It’s certainly high quality but there are no graphical bells and whistles – the symbols on the reels are on a plain black background and the reels themselves are set against  dark blue.

All the symbols are of a traditional nature and include cherries, oranges, plums, lemons, grapes, melons, bells and sevens. The only special symbol is a wild star which substitutes for all others. The star is also important because it activates the single bonus feature in this game.

This is quite an innovative feature and one which we like; it’s triggered by landing the wild star symbol on reels one and five as you can see in the video above.

An extra wild symbol will be added to the middle position on the third reel and now the symbols around that wild will turn clockwise. There are seven moves in total and after each move the reels will be evaluated for wins. Because there’s a wild on reels one and three there will be a a guaranteed win on each move, however small.

Each win can be gambled by clicking the ‘Gamble’ button underneath the reels. It’s a simple red/black guessing game which can double your money for a correct guess. The potential maximum win depends on your current stake.

Take care with the gamble feature – it’s easy to have a point each time you win but this the fastest way to deplete your bankroll.

This is fairly standard Novomatic slot but it’s certainly enhanced by the addition of the clever bonus feature. It’s quite fought o trigger but profitable when you do.