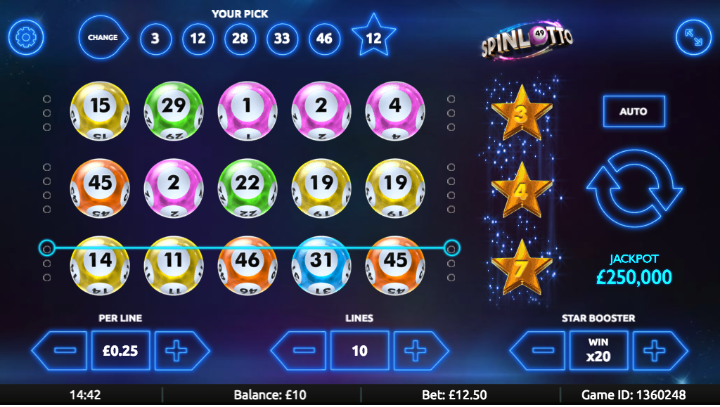 If you’re looking for something a little unusual to play then you could do worse than check out Spinlotto from Gamevy; imagine if you can the attractive lovechild of a bizarre one night stand between an online slot and a bingo game and you’ll be nearly there – it’s good stuff though and you can read all about it below.

Spinlotto is a five reel slot with three rows and up to ten paylines; there’s a neat neon design to this game and a laid back soundtrack which doesn’t intrude upon your gameplay.

A bit of explanation then – there are five numbers above the reels between 1 and 49 and these are picked by the player (or picked automatically by the game) prior to any spins – matching at least two of these numbers to those on the reels anywhere on a payline awards a prize.

Now pick a number between between 1 and 15 and this is your lucky star number; if it lands on the same row as the final ball on a winning payline you prize will be multiplied.

The symbols are made up of bingo balls from numbers 1 to 49 and there are no wilds or bonus icons in the main game.

This is an optional three level extra bet which adds an extra multiplier to any lucky star wins, it does not affect the jackpots. The RTP changes as follows:

There are three possible jackpots to win and they are won by landing three different payline combinations:

Spinlotto is a very well thought out game designed to a very high quality; it’s very enjoyable and comes with an RTP of between 89.00% to 95.90% depending on whether the Star Booster is used.