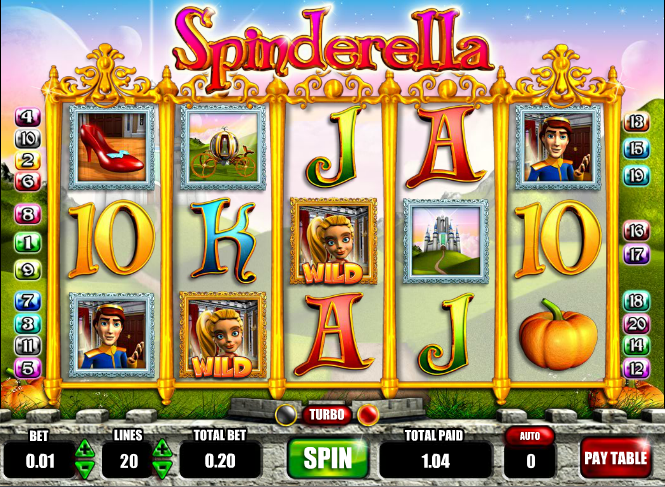 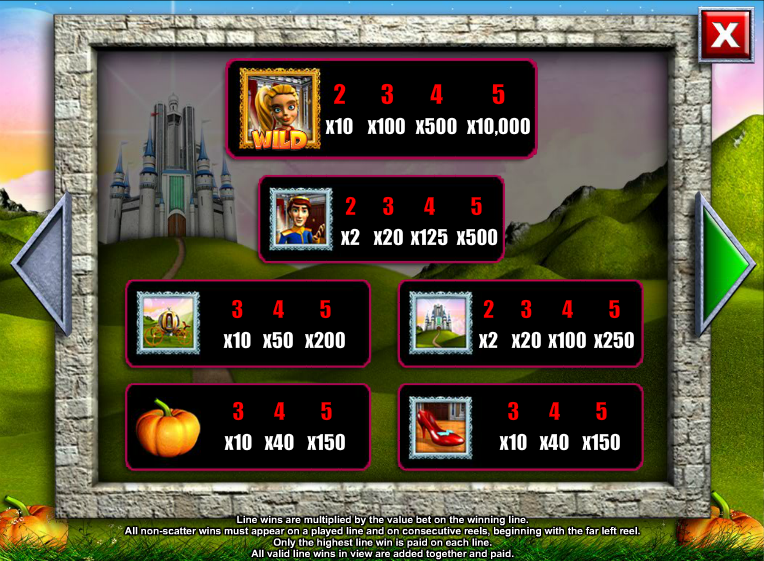 Do you remember the 1990s all-girl hip-hop group Salt-n-Pepa? If so you will recall that one of the members was called Spinderella; now put that out of your mind because this online slot from Mazooma is about the fairytale of Cinderella in which a fairy godmother allows the title character to attend the grand ball where she meets the Prince.

Spinderella is a five reel slot with three rows and up to twenty paylines; there’s an atmosphere of fantasy about the proceedings and the landscape behind the reels features a moon-filled sky overlooking lush green fields.

There are five high value symbols here – Cinderella’s red shoe, the pumpkin, the royal castle, the carriage and the prince. Lower values are the standard 9, 10, J, Q, K and A.

Cinderella herself is the wild and she will multiply any wins to which she contributes a random amount up to 10x. The fairy godmother is the scatter symbol who activates the main feature.

Landing three or more of the fairy godmother symbols anywhere in view will trigger this feature and initially you will be taken to a screen where you must spin two wheels, one to determine the number of spins awarded (up to 50) and the other to nominate an extra symbol to be wild – this can be multiply and wins up to 10x.

You will then move to the spins screen and the action will get underway. The extra wild helps with extra wins and it’a also possible to re-trigger the spins by landing three+ more fairy godmothers.

Occasionally you will get the ‘rewind’ feature which will wind back one reel after a spin to grant you a win of some description.

You can play with just one payline if you wish and still have the same chance of triggering the feature but you will win proportionately less.

Spinderalla is a pretty smooth slot with a nice theme and some extra creativity during the free spins round. The RTP of 95.05% is not particularly generous but good enough.