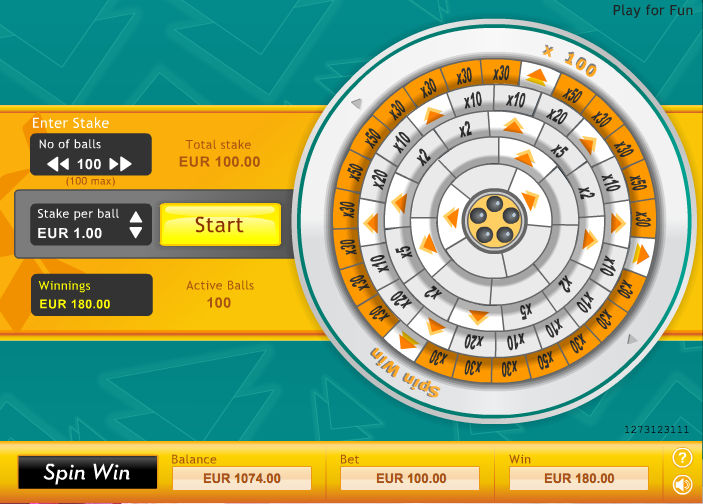 Dynamite Idea is a small slots developers about which we know very little but that hasn’t stopped them coming up with something a bit different here. Spin Win is a simple idea which borrows one or two elements from other games and delivers us a pretty addictive gaming experience. Read on to find out more about this odd little diversion.

Spin Win could be described as a cross between Wheel Of Fortune, roulette and one of those coin-drop arcade games which still seem to prove popular. Essentially it’s a pot luck game which involves hoping that one or more silver balls drops down as many rings as possible to win increasingly large multipliers.

When you load up the game you will be faced with a contraption on the right hand side involving six concentric rings. The top two rings are blank but each larger ring is separated into segments of increasingly large multipliers.

Before you press Start, you can select the number of balls to play (5 – 10o) and the wager per ball to give you the total stake. Now you can get proceedings underway by pressing that big yellow ‘Start’ button and the balls at the top will roll onto the next ring which will begin to spin.

Balls which land on a multiplier from the third ring down move no further and when no balls are eligible to move, the win will be calculated and the round is over. Reaching the sixth and final ring will pay 100x the wager per ball.

For maximum action, increase the number of balls to the maximum of 100 and watch the balls in action. You may want to reduce the stake per ball when you do this.

It’s a simple concept but quite good fun and oddly addictive. Most of the attraction is in watching the balls go about their business.