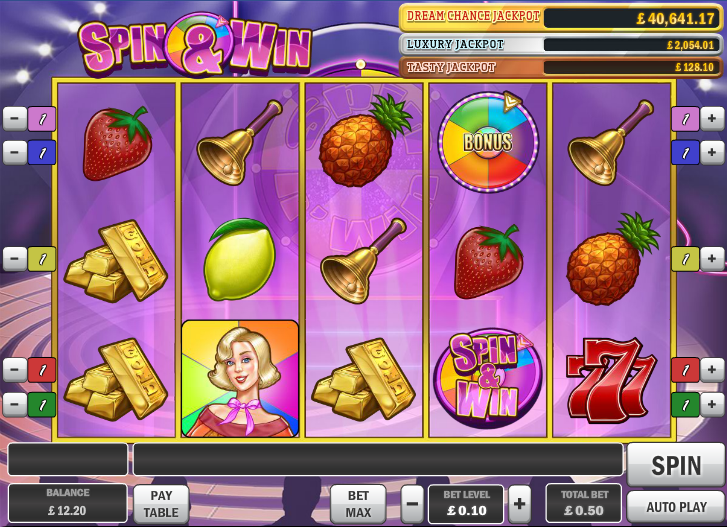 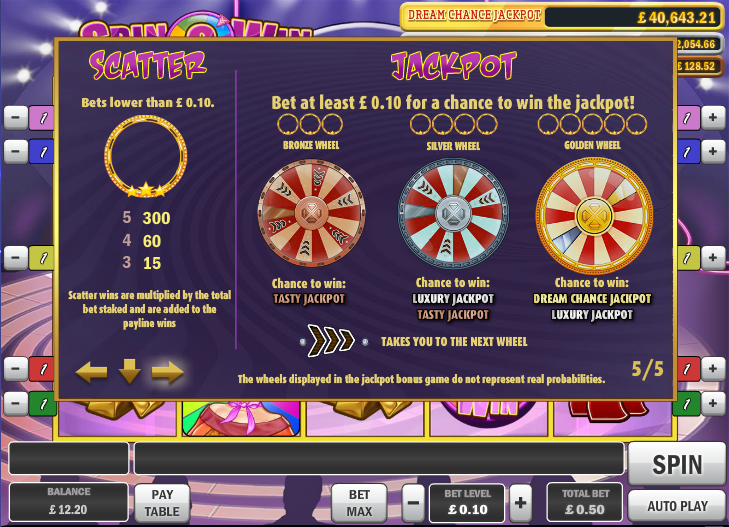 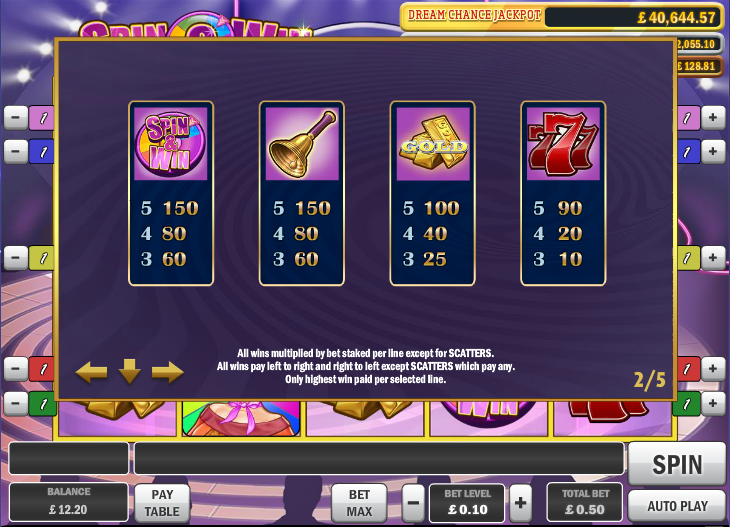 Spin & Win is a cheerful fruity slot and it joins a number of Play N Go machines which have been recently released. As well as being high quality games they are also all connected to Play N Go’s progressive jackpot network and you can see the running totals of those amounts above the reels. Read on to find out more about that jackpot and the other bonus features.

Spin & Win is a three reel slot with just five paylines. It’s got something of a television studio atmosphere, probably most closely related to Wheel Of Fortune. There’s a variety of symbols on show here with the three lowest values represented by  a strawberry, a lemon and a pineapple; higher values are some red sevens, some gold bars, a hand bell and the Spin & Win logo.

There are two bonus symbols – a glamourous host and a coloured wheel – which activate their respective feature. Unusually there is no wild symbol.

Trigger this mini-game by landing three or more of the television show host symbols anywhere on the reels. Those symbols will now change into gifts and float to the front of the reels; just pick one for a cash prize. Wait too long and a box will be chosen for you automatically.

Three or more bonus wheel scatter symbols anywhere on the reels will kick this feature off. The coloured wheel with six segments will appear on the screen and you must spin it. Every time it lands on a colour you will win a prize but that colour will be marked with an ‘X’. Hit that X on another spin and the round is over.

The gold rings around the edge of some symbols are the key to this prize. Land three, four or five scattered for the following to happen:

You must be betting a minimum amount to qualify for the progressive prizes and that amount will be displayed in the paytable.

Any win can be gambled by using the ‘Gamble’ button which appears after a success. Play this game to try and double or triple your winnings. There’s a limit of ten correct picks or £50,000.

Don’t be tempted to gamble every win – that’s the surefire way to deplete your bankroll quickly. The odds are already against you so don’t pouch your luck too much.

The current crop of Play N Go slots are of a very high quality and this is no exception – top notch graphics, several bonus features and a progressive jackpot make for a game not to be missed.