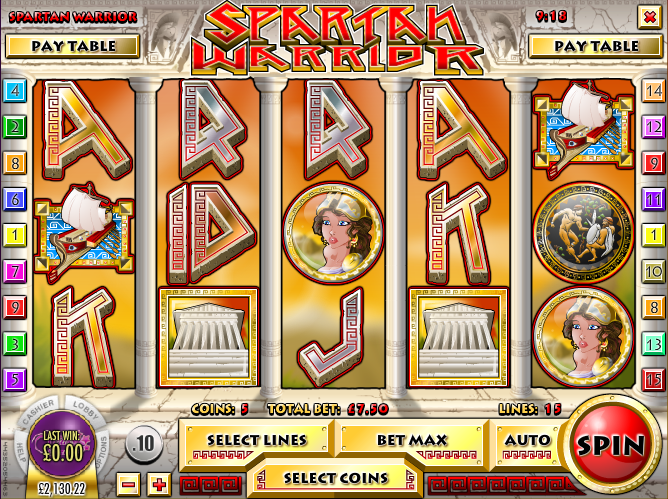 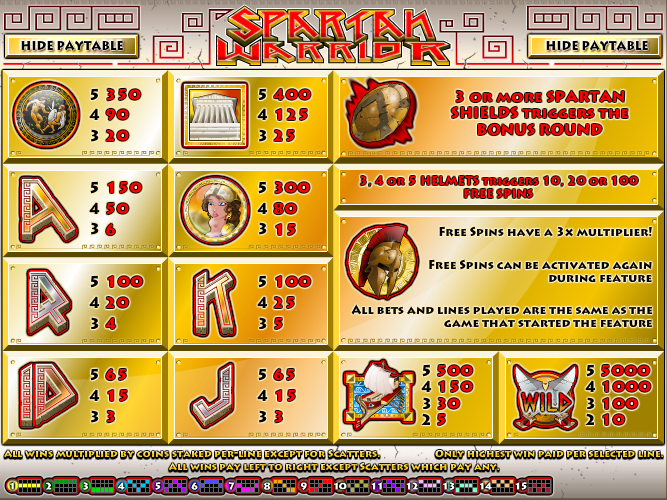 Two and a half thousand years ago the city state of Sparta was a beacon of classical civilisation and this online slot celebrates the fighting men who protected it and fought for the wider Greek region. It’s called Spartan Warrior, it’s from Rival Gaming and it includes two separate bonus features.

Spartan Warriors has five reels, three rows and fifteen payline; it’s designed with ancient Greece in mind with stone structures and carvings. Columns separate the reels and there’s a dramatic soundtrack to accompany your gameplay.

There are four main base game symbols – a trireme, a girl, a temple and a piece of art depicting a battle. 10, J, Q, K and A make up the lower values.

The wild is represented by crossed swords and there are two scatter symbols – the helmet and shield – which activate their respective extras.

There are plenty of free spins available here and they’re triggered by landing three or more of the helmet symbols anywhere in view; you will receive the following:

Everything you win will be multiplied by 3x and you can re-trigger this feature who playing it. You can also trigger the bonus round (see below) so this can be a very lucrative add-on.

This mini-game is triggered by landing three of more of the shield scatter symbols anywhere on the reels. You must now take part in a fight with another warrior so the first thing to do is pick two weapons from those available. Now pick an opponent from the three available on the right and watch the anime-style action play out.

The better you fare in the fight, the more coins you will win.

We think the outcome of the fight during the Shield Bonus is probably pre-determined so don’t waste your time trying to work out the best combination of weapons and opponents.

This has been a winner for us so far which always paints games in a good light. However it’s got the ingredients of a good game – an interesting theme, a nice soundtrack and easy-to-trigger bonuses. Worth a go.