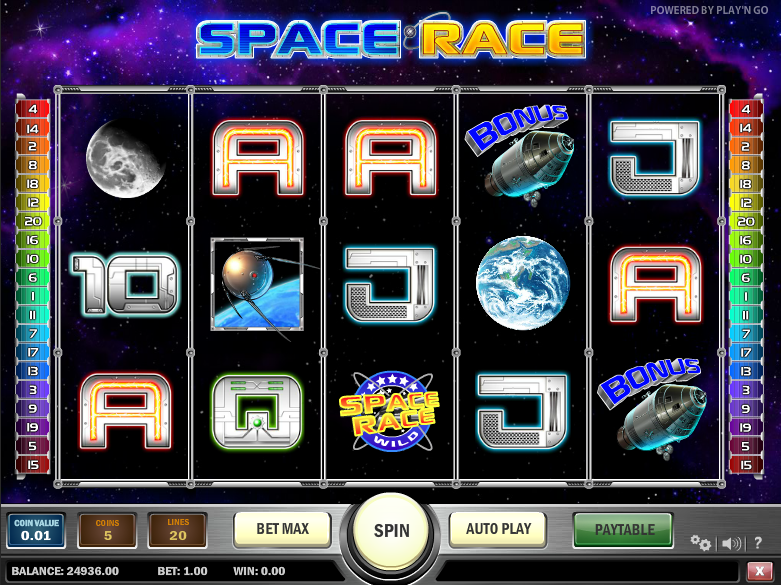 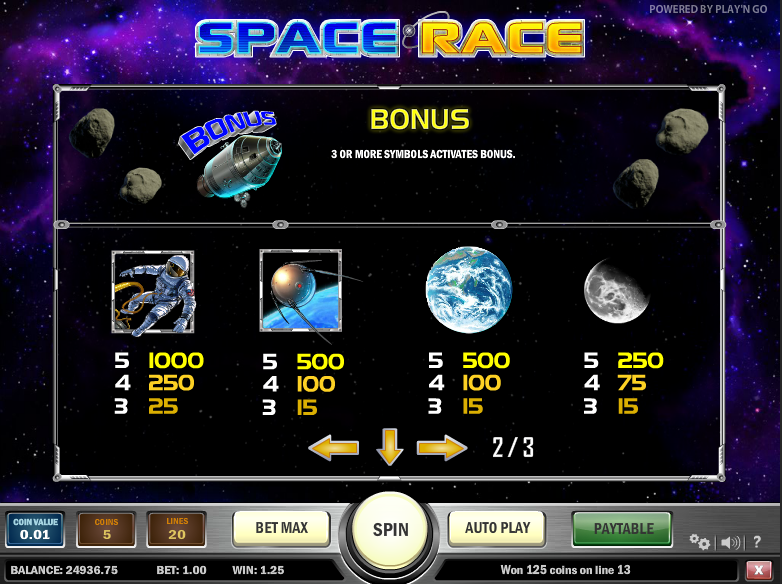 The Space Race may be the name of this online slot from Play N Go but historically it describes the competition between the two main Cold War rivals – the United Staes and the Soviet Union – to gain the upper hand in space exploration. It occurred between the mid-1950s and the early 1970s and determining the winner probably depends on your nationality; the Soviet Union launched the first satellite and put the first person in space, the U.S. landed a human on the moon.

Back to slots business though and Space race is a five reel slot with three rows and twenty fixed paylines; the backdrop to the metal-framed reels is a multicoloured view of the galaxy with occasional shooting stars bisecting the vista.

The high value symbols are them-related and include a space-waling astronaut, Sputnik 1, the Earth and the moon. 10, J, Q, K and A represent the lower values.

The Space Race logo is the wild symbol which substitutes for everything except the scatter and the bonus symbol; those are represented by a meteor shower and a spacecraft.

This is triggered by landing three or more of the spacecraft scatter symbols anywhere in view. You now get to play a Battleships-inspired game in which you pick a grid position to place your craft.

A meteor shower will now hit the grid, destroying part of your shield if you taker a hit. If you survive the shower you move on to a more valuable grid and this continues until your shield is destroyed or you reach the final grid on the moon.

As you can see from the video above, you can trigger this by landing three or more of the meteor shower scatter symbols anywhere in view; you will now receive fifteen free spins and during this round the scatter symbols becomes an extra wild. It’s not possible to trigger more spins from within this round.

Space Race does the job efficiently but it’s probably not as good as more recent Play N Go slots; it’s still of a high quality though and the two bonus features add to the astronomical excitement. There’s an RTP of 94.23%.