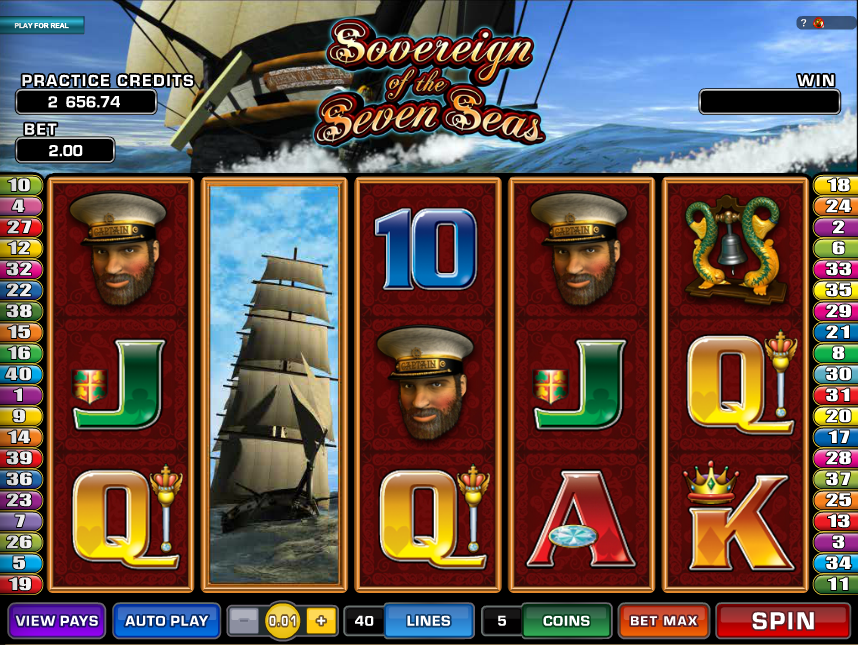 Avast ye scurvy dogs!  The Sovereign of the Seven Seas is here to explore the seven seas and gather plunder along the way.  It’s an online slot from Microgaming which features some great graphics and a cool bonus game as well as some dramatic sound effects as you spin the reels.

There are a five reels and an impressive forty paylines to play with here and the background to the game is a ship crashing through the ocean waves; 9, 10, J, Q, K and A represent the lower value symbols but the higher value ones are a ship’s compass, an ornate bell, a chest full of coins and the captain himself.

The wild symbol is the figurehead at the bow of the ship and she bursts into life when activated; the scatter symbol is a cannon and can trigger the bonus game.

As you can see from the video below you now get to choose one of three barrels which will give you the following:

The wild symbol is an expanding wild in both the standard and bonus games and if she appears on reels two, three or four she will cover all the symbols in her reel.  You can slaos see this happen in the video.

If you fancy the chance of doubling your win just click on the ‘Gamble’ button which will initiate the card game.  Here you can choose to double your money with a red/black bet or try and quadruple it by selecting the correct suit.  When you’ve won enough (or lost) just click the big ‘Collect’ button underneath the reels.

This is fairly straightforward slot by the standards of some of the latest releases but it moves along quickly and contains some nice video clips to accompany the gameplay.  Definitely worth a few minutes of your time.