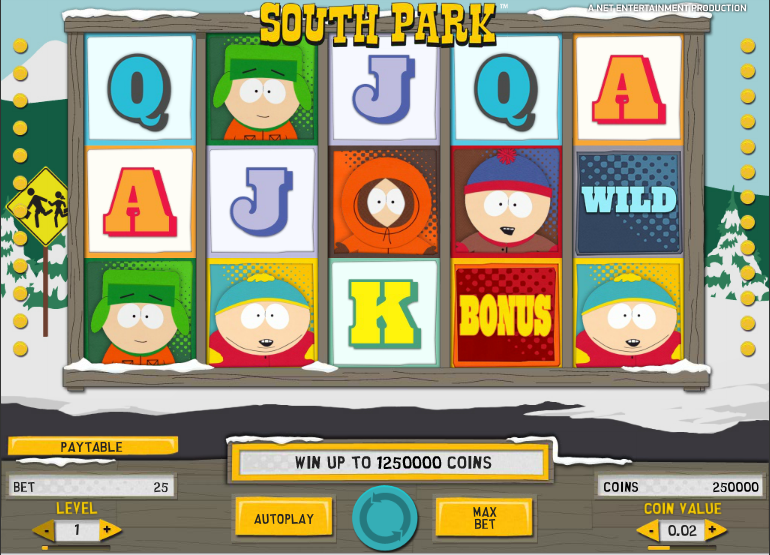 At long last our favourite foul-mouthed kids make it onto the reels in South Park from Net Entertainment; based on the classic (and very funny) comic series written by Trey Parker and Matt Stone and now incredibly into it’s seventeenth season.  This slot is packed with bonus features and the graphics are entirely faithful to the television show.

South Park features five reels, twenty five fixed paylines and of course it features all our favourite characters from the show as symbols – Stan, Kyle, Eric (Cartman) and Kenny as well as J, Q, K and A.

Bonus symbols include a Cartman wild, a regular wild, a red ‘bonus’ plus a character bonus which activates the features.

To activate this particular feature you’ll need to land two of the red bonus symbols on reels three and four plus a character bonus symbol on reel five; that character will determine which bonus game you get to play.

Terence And Phillip – this occurs in the base game and three wilds will be placed on reels two, three and four to maximise you winning chances.

Mr. Hankey – the charming Mr. Hankey will randomly appear at the bottom of the screen before ‘dumping’ wilds on reels one, three and five to enhance your chances.

Cartman – this is where we meet the beefcake wild, a 3 x 3 block of wilds that appears on reels two, three and four.  It can can cover all visible reels or you may just see part of it; either way it’s a winner!.

There’s nothing to dislike about South Park although it is interesting that the dated graphics of the television series mean that they are of lower quality than we’d expect from a Net Entertainment slot.  But the result is a slot that looks exactly like the TV show and that’s how it should be.

The huge variety of bonus feature means this is a slot which you’ll return to frequently.