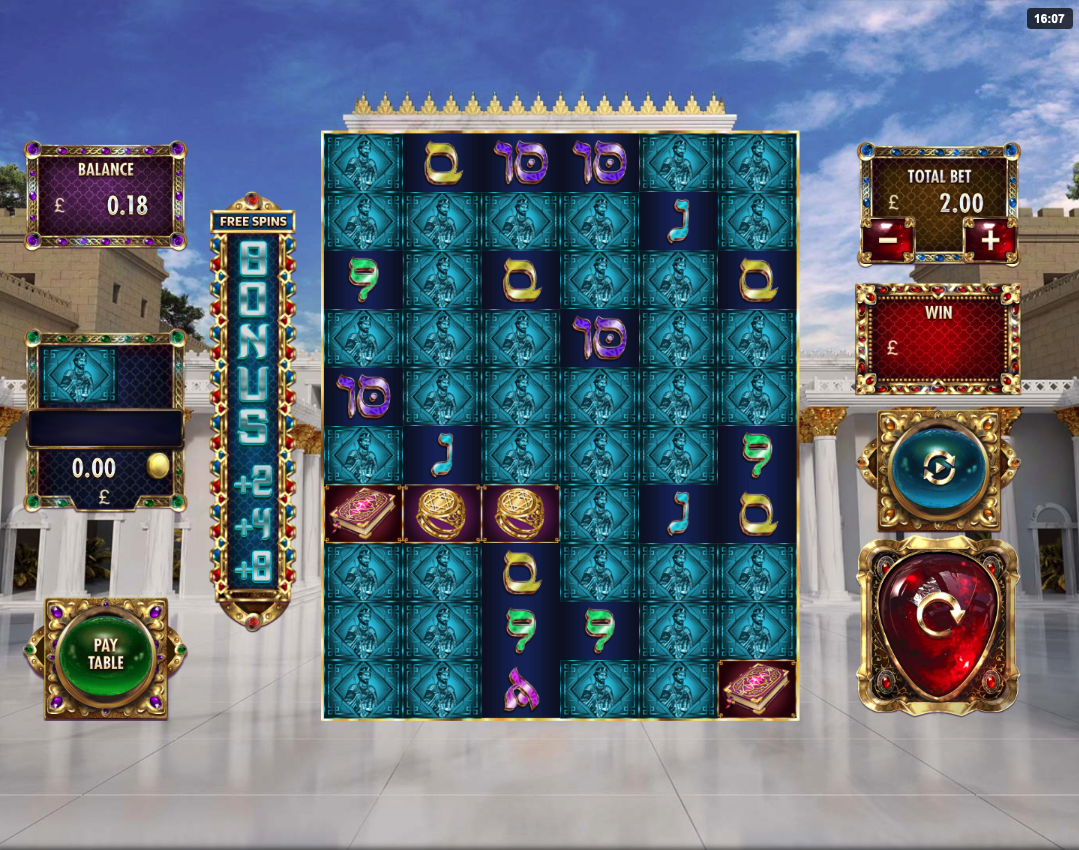 Historians generally agree that King Solomon probably existed and this legendary King of Israel would have lived around 3000 years ago; Solomon: The King is an online slot from Red Rake Gaming which, from £0.20 per spin, offers players cascading reels, free spins and win multipliers.

Solomon: The King is a six reel slot with ten rows and, according to the developer, one million paylines; three’s a lot of gold involved in the expensive design and a backdrop featuring a fabulous marble palace.

High value symbols include Solomon (who can appear stacked), a golden box, a gold ring and an ornately-bound book; 9, 10, J, Q, K and A represent the lower values. The blue ‘Wild is wild and it will substitute for all other symbols. The blue symbols are blanks.

Any symbols in a winning combination will disappear and be replaced by more falling in from above – more combos can then be formed to continue the process.

On a non-winning spin the blue blank symbols are counted up and added to the meter on the left hand side – when this is full (it takes a lot of filling) then Solomon’s Justice will be triggered.

You’ll get three free spins to start with on a set of reels displaying only seven red/gold symbols in random positions; each time a new red/gold symbol ands it will lock in place and reset the number of spins to three again. When there are three spins with no matching symbols or all reels are full the prizes are awarded depending on the shapes formed by the symbols – some examples are shown below.

If all positions are full then the Grand Prize of 10000x the stake is awarded.

Each subsequent cascade in a spin will light up one of the letters to the left of the reels; Bonus symbols on the reels will also light up one more position. When all the letters are lit up the feature is activated but gameplay will continue so it’s possible to add an extra two, four or eight spins to the eight initially awarded.

With each spin one of the multipliers shown to the left is eliminated and at the end of that spin the total win is multiplied by one of those values remaining. If you end the round with less than 10x the stake you’ll get an extra four spins.

Solomon: The King is a little bit basic in the graphics department but that doesn’t matter because the bonuses are clever and well though out; play for long enough and may even get to play Solomon’s Justice!