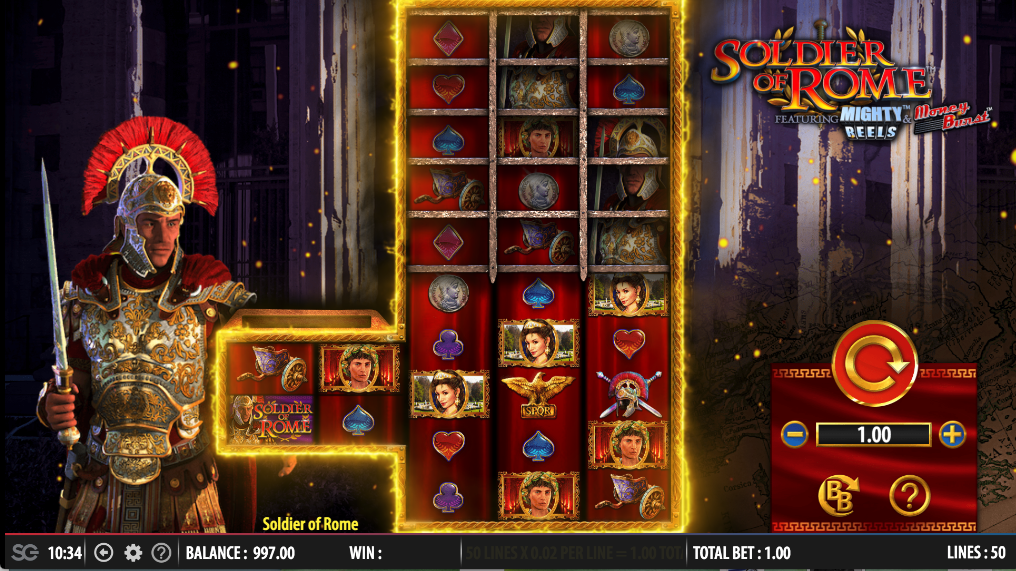 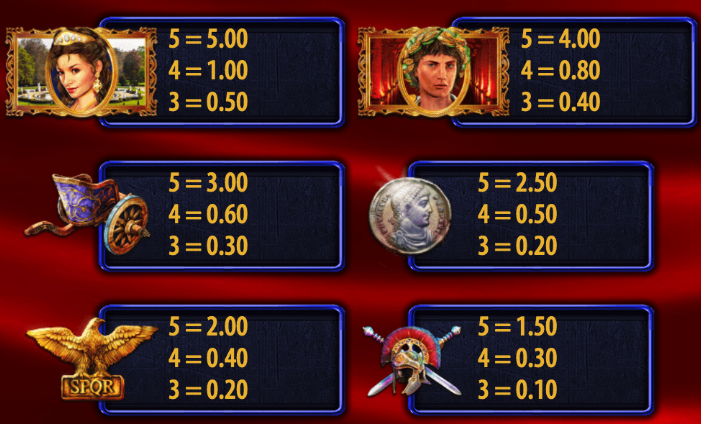 A trip to Ancient Rome is always a treat as an online slots fan and this time we’re travelling through time to visit the Soldier of Rome which happily is also the name of this game from Barcrest; it comes with their proprietary Big Bet option, free spins and the ‘Money Burst’ reels.

Soldier of Rome is a partially five reel slot with three rows and up to one hundred paylines and you can see the odd shape in the screenshot above; crumbling pillars form the backdrop to those reels while our hero stands to the left, looking slightly nervous.

The high value symbols include the ruling couple, a chariot, a silver coin, an SPQR standard and a pair of swords; playing card symbols in purple, blue, red and pink represent the lower values.

The soldier is wild and he’ll replace all others to help form winning matches except for the Soldier of Rome scatter symbol. The wild symbol only appears on reels three, four and five but it is three positions high and will expand to fill the whole reel if lands completely in view. He will also bring the five rows in the upper right hand side into play and increase the paylines to one hundred – these are the Mighty Reels.

The second wild is the game’s logo including the soldier and this only appears on the smaller reels on the left.

This is triggered by landing at least three of the Soldier of Rome scatter symbols or three of the game’s logo wilds anywhere in view; you’ll receive an initial ten free spins but each extra bonus symbol in view will award and extra five spins up to a maximum of twenty five.

The soldier wild only has to be partially visible during this round to trigger the Mighty Reels; more spins can be triggered by landing three more scatters during this feature.

Trigger this by landing four matching symbols in the four reel positions to the left; you’ll now receive a number of ‘Lightning’ spins in which extra instances of that symbol are added to the main reels.

This is an optional set of five spins in for set prices with the following extra features:

Soldier of Rome is a slot which looks a little complex to begin with but hopefully we’ve explained it adequately enough above; what it does do is offer something different and that’s always a good thing. Note that using the Big Bet option increases the RTP from 93.78% to a tasty 97.82%.