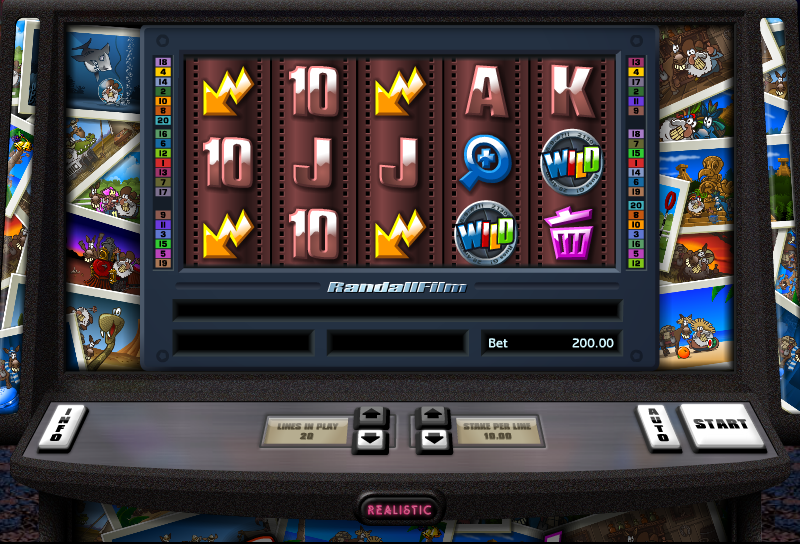 Realistic Games do a nice line in online slots which look as they could be on the floor of some real life casino – in fact they look realistic and that’s the case with Snapshot, a funky-looking but basic game which reintroduces the character of Randall to us. Randall previously appeared in games’s such as Randall’s Riches and here he is a photographer, snapping scenes as he embarks on his travels.

Snapshot is a five reel and twenty payline slot which is designed in Realistic Games’ usual manner – as you can see from the screenshot it looks like like a physical machine. Examples of Randall’s photography are scattered around in the background and a closer look will reveal that they are all scenes from other games by this company.

There’s not much variety in the symbols – the usual 10, J, Q, K and A – but the three more valuable lines are photographic icons including ‘zoom’, ‘trash’ and ‘flash’.

There’s a colourful wild symbol which looks like a camera lens and and another lens which represents the scatter symbol.

Three, four or five scatter symbols anywhere on the reels will award the appropriate scatter win but they will also reward your good self with ten free spins.

During the free spins an extra Snapshot symbol will appear on the centre reel and each time it lands it will double your current total win – this is obviously a valuable symbol to land, especially towards the end of your spins.

Unfortunately the spins cannot be re-triggered from within the feature.

The feature is triggered by a scatter symbol so you don’t have to be playing maximum paylines to increase your chances of grabbing those free spins. The prizes will be bigger if you do though.

This may be pretty basic but there’s a lot to like about Snapshot from the crisp graphics and the groovy soundtrack to the return of Randall. Certainly worth a few minutes of your time.