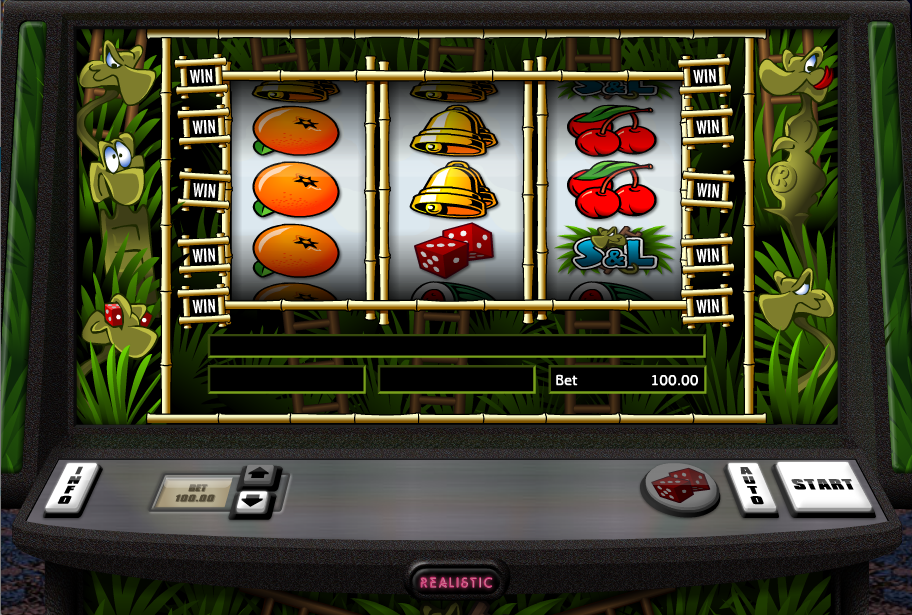 Realistic Games are a company who do a nice line in three reel slots and in Snakes & Ladders they have one more to add to the list. It’s not the first snakes & ladders-themed online slot we’ve played but it holds it’s own well enough and of course it contains a bonus feature based on the original board game itself.

Snakes & Ladders is a smooth-looking three reel slot with just five paylines. The backdrop to those reels is deep jungle and six suspicious-looking snakes are lined up on the left and right of the screen. The reels themselves are framed in bamboo and this certainly looks a high quality game.

This is a relatively simple game and there are a selection of traditional symbols to maintain that simplicity; they include cherries, oranges, bells, grapes and melons.

A pair of dice is the symbol which activates the bonus feature and the S&L logo also has a small surprise up it’s sleeve which we shall explain below.

You’d be surprised if this slot didn’t contain a game of genuine snakes and ladders as a feature and your suspicions will confirmed here.

You need to land three of the dice symbols on an active payline to kick it off and as you can see from the video below, the machine will shrink into the background and unveil the snakes and ladders board. All you have to do is press the Dice button to roll and move around the board.  When you land on a number, that’s your prize and it’a a multiplier of your stake.

Landing on ladders and snakes will move you up and down respectively but you’l always win something. Rolling a double and landing on a number means that prize is doubled.

Landing three of the S&L logos on an active payline will pay you 30x your stake and also give you a chance of winning that prize again. You will get to roll a dice with the faces showing Yes or No.

This is a good-looking and enjoyable slot which is well worth checking out; five reel players should be reassured by the inclusion of a decent bonus feature here.