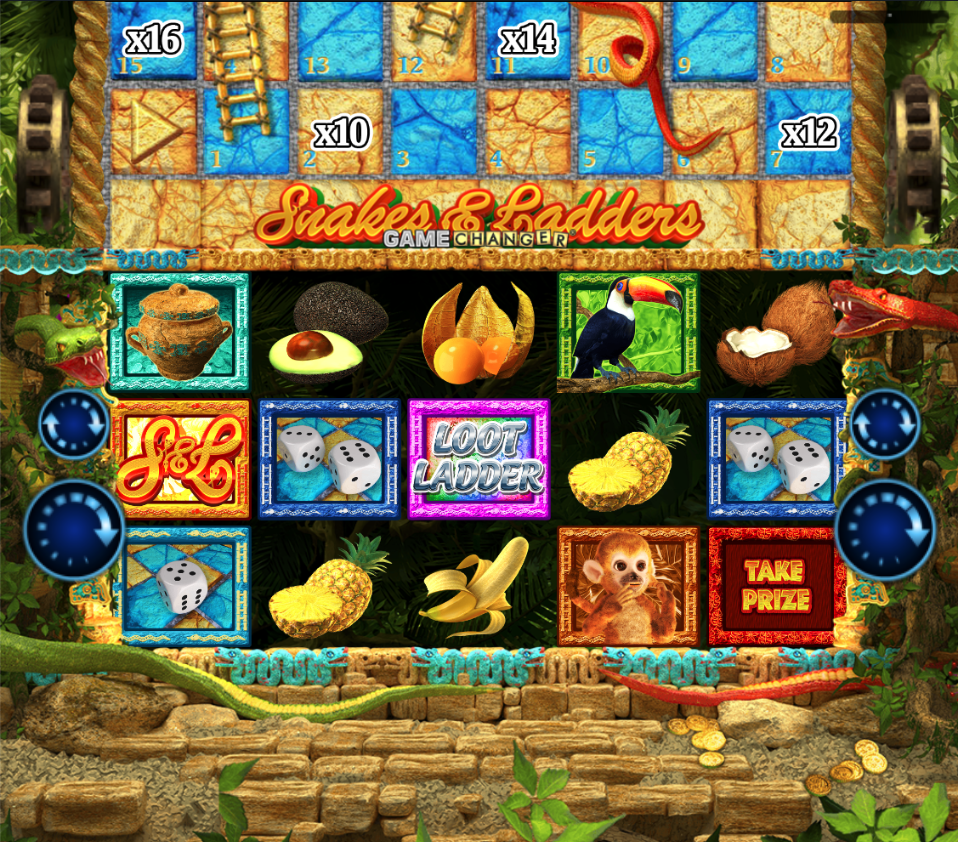 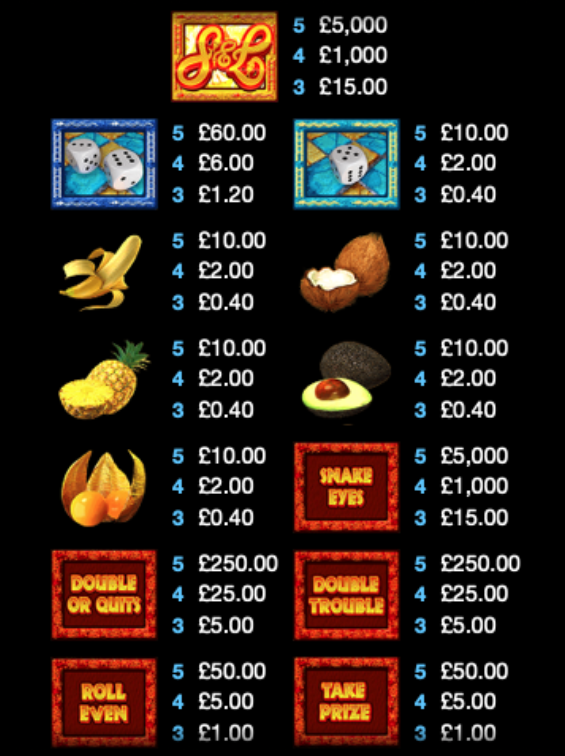 If you’ve previously enjoyed an online slot from Realistic Games called Snakes & Ladders then you’ll be pleased to hear that there’s a sequel available in the shape of Snakes & Ladders Game Changer; it adds two more reels and from £0.05 per spin it offers players a bonus based on a board game along with four other extra features.

Snakes & Ladders Game Changer is a five reel slot with three rows and twenty fixed paylines; it’s a jungle setting within the remnants of some lost civilisation and unexplored enough to still have gold coins lying around on the ground.

The regular symbols include single and double dice, bananas, coconuts, pineapples, avocados and mangoes(?); there are also symbols titled Snake Eyes, Double or Quite, Double Trouble, Roll Even and Take Prize. The wild symbol is the S & L logo and the specials are Toco Toucan, Squirrel Monkey, Loot Ladder and the Pot.

Ok, deep breath….this is a long’s and it’s triggered by creating a pattern on the reels which includes any of the symbols or wilds shown below around the outside (as shown in the pic).

That pattern becomes the game board area and if there are toucans, monkeys or ladders in the original combo then their respective trails will be active – the first step on the trail will be lit. Any of these symbols – Snake Eyes, Double or Quite, Double Trouble, Roll Even and Take Prize – will be replaced with an ‘X’ and the number ten.

Now you can click the button to roll the dice and move around the board; landing on an ‘X’ will decrement the number by 1 and when it reaches zero it becomes an unsafe position. The following positions are ‘good’

Reaching a ladder and moving up it will allow access to the Snakes & Ladders board on which prizes can be won. This is probably best explained by Realistic Games themselves:

These positions are ‘bad’

Watch it all unfold in the video above if we haven’t explained it very well.

This is triggered by landing five toucans on a payline in the base game or completing the trail in the Game Changer; you’ll get to spin two wheels which both reveal multiplier values which will be applied to the stake.

This is triggered by landing five monkeys on a payline in the base game or completing the trail in the Game Changer; you’ll now get to play unlimited spins on a mini-slot featuring just monkeys, bananas and coins until the first non-winning spin.

Trigger this by landing three Loot Ladder symbols on a payline in the base game or completing the trail in the Game Changer; you’ll get to roll two dice and the result will determine your prize with a maximum of 1000x the stake for a 12.

This is triggered by landing at least three pots on a payline in the base game or by landing on a pot in the Game Changer; you’ll now get to pick from pots (the number is equal to the number of triggering symbols) with multiplier prizes ranging from 2x to 1000x.

Well the first thing to say is that there’s plenty of bonus action available here, especially for the luckier players; we got lucky and triggered the Game Changer during our gameplay and you can see the result in the gameplay video above and it’s lucky we did otherwise we may not quite have understood what as was going on. Overall it’s pretty entertaining and a nice upgrade of the original.

The Return To Player percentage for Gordon Ramsey Hell’s Kitchen is 96.10%.

How To Win On Snakes & Ladders Game Changer?

Where can I play Snakes & Ladders Game Changer?