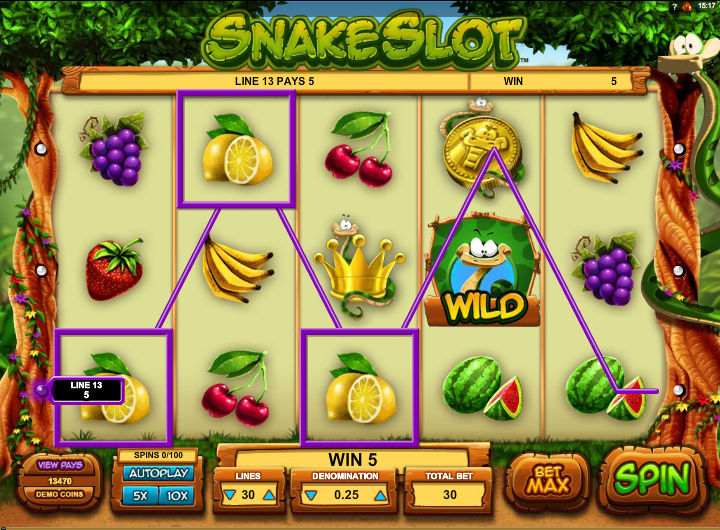 We don’t often get to play online slots from Leander Games but it’s generally a pleasure when we do; Snake Slot is one we’ve been playing recently at Bet Victor and it’s certainly one we should recommend. Lovely graphics and some interesting bonus features mean this snake-themed slot is well worth checking out.

Snake Slot is a five reel and thirty payline game set deep in a jungle environment. Twisted tree trunks mark the left and right boundaries of the reels and the snake himself is curled around the tree on the right of the screen.

The basic symbols are traditional but well-drawn and include cherries, lemons, strawberries, bananas, grapes and melons. More valuable symbols are the gold coin, the crown and the diamond, each of which have a snake wrapped around them.

The snake is also the wild, there’s a snake/star combo which activates the free spins and then a snake/fruit symbol which triggers the second feature.

This is a feature we’ve not seen before and you can trigger it by landing the snake wild symbol on reel five. The game will now choose a random payline and blank out all the other positions on the reels.

A fixed wild will appear on reel one and then you’ll get two more respins to try and win some money.

Three of the snake/star scatter symbols on reels three, four and five will trigger this feature. It’s just a basic free spins  round in which you receive ten spins but it is possible to re-trigger it by landing more scatter symbols. It’s also possible to win the Snake Lucky Line feature from here.

Landing three of the fruit/snake bonus symbols on reels one, three and five and on an active payline will kick this feature off. Your task is to select from the objects on offer to try and make colour matches; each correct match will increase the multiplier prize awarded.

The Jungle Party Bonus is triggered by symbols on an active payline so make sure you’re playing all thirty to give yourselves the maximum chance of winning.

This is a really good example of how to design a good-looking slot with plenty of engaging bonus features. Well worth spending some time on.