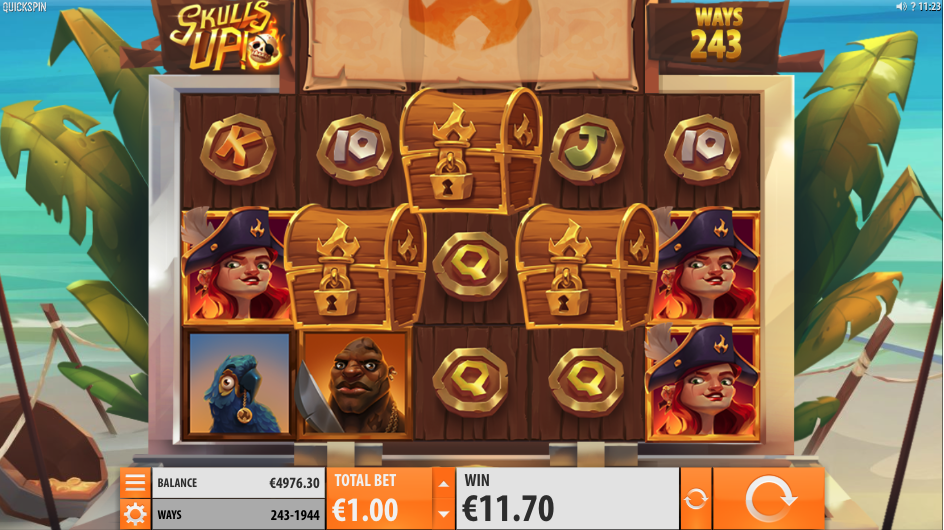 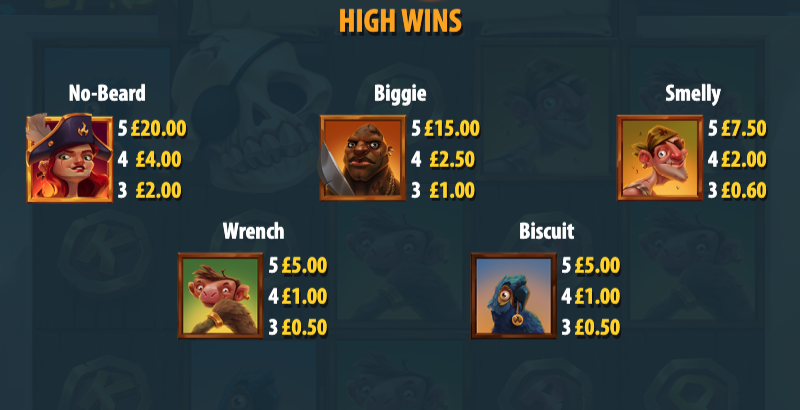 Pirates are always an entertaining addition to an online slot machine and so we are pleased to bring news of Skulls Up!, a release from Quickspin Gaming themed on those scurvy sea dogs which offers players respins, free spins and a potential 1944 ways to win.

Skulls Up! is a five reel slot with three rows and 243 ways to win in the base game; the setting for the reel-spinning action is a beach on a tropical island somewhere where palm trees and calm waters set the scene.

Five characters from the pirate crew – No-Beard, Biggie, Smelly, Wrench and Biscuit – represent the higher value symbols while coins inscribed with 10, J, Q, K and A make up the lower values.

There are two wilds – the skull and the flaming skull – which both substitute for all standard symbols; the flaming skull has an additional feature attached which is described below. The treasure chest is a scatter symbol.

This is triggered whenever a flaming skull wild symbol lands on the reels and it will move up into the lowest position of the flag above the reels, opening up that position and increasing the number of paylines in the process. You’ll receive a respin with those extra paylines and if another flaming or regular skull lands the process continues – after one spin the flames die out and the skull will drop away so when there are no more skulls on the flag the paylines return to normal. The luckiest players can open up all reel positions for 1944 ways to win.

Landing three of the treasure chest scatter symbols on reels two, three and four will award six free spins; the Skulls Up! Respins are active during this round and the increased reel positions will remain in play even after the flames have died out. Two extra spins are awarded for each reel which reaches its maximum height of six positions.

Pirates and free spins always make a useful combination and they combine very well in Skulls Up! with a bit of help form those flaming wild skulls and huge number of potential paylines; it’s more top notch graphics and gameplay from Quickspin.