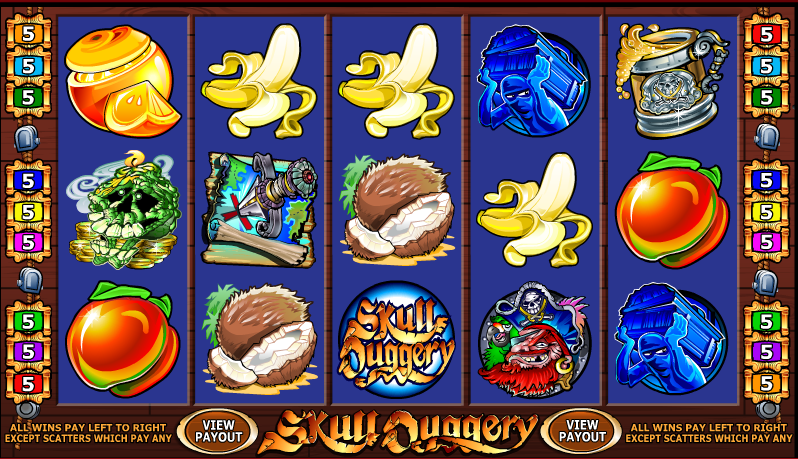 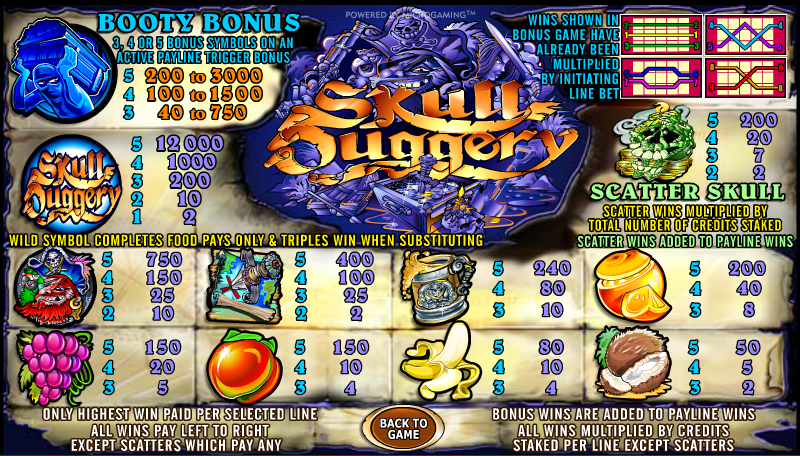 The life of a pirate in days gone by was an unpleasant and uncompromising one involving undesirable living conditions and an almost certain guarantee of an early death. A number of online slots are available to put a cheerful gloss on this theme and Skull Duggery is one more addition to that list. It’s from Microgaming so read on to find out more.

Skull Duggery is a five reel slot with three rows and up to nine active paylines. It’s big symbols spin on reels which are attached to a wooden background and there are some watery, piratey sound effects mixed with some electronic beeps to keep you amused.

All the symbols are related to the theme and include coconuts, bananas, oranges, grapes, mangoes, a beer stein, a treasure map and the red-bearded pirate captain.

The Skull Duggery logo is wild but will only substitute for the fruit to make winning paylines; those wins will be tripled. The bonus symbol is a thief making off with a treasure chest and the scatter is a green skull thing perched on a pile of cash.

‘Booty Bonus’ is a great name for a bonus feature but it’s actually a fairly brief affair. It’s triggered by landing three or more of the thief/treasure chest symbols on an active payline.

You will now be presented with five scurvy shipmates on the deck of a ship and you need to decide which one to eject into the water. You will receive a coin prize for that pirate and the amount will be partly based on whether three, four or five bonus symbols  triggered this feature.

Give yourself a better chance of triggering the feature by playing with the maximum paylines.

Clearly this is a slightly dated slot now but it’s well-designed with some amusing sound effects to accompany your gameplay. An RTP of 95.80% is reasonable enough and we’d recommend pirate-fanciers to check this out.