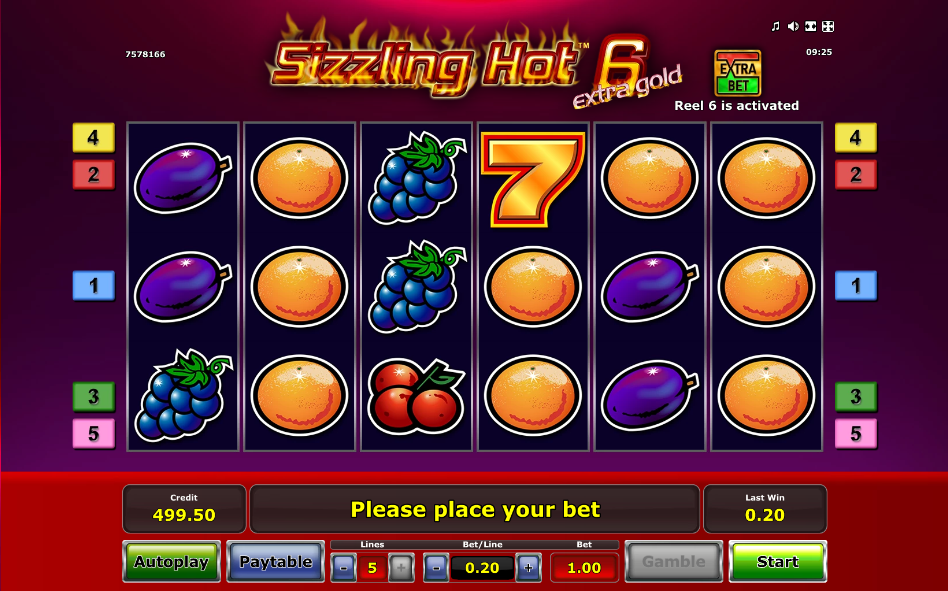 If you previously enjoyed playing Novomatic’s Sizzling Hot Deluxe then you’ll be delighted to know that there’s a sequel available in the shape of Sizzling Hot 6, an online slot with the added draw of an optional sixth reel – find out how it all works below.

Sizzling Hot 6 ‘extra gold’ is a five/six reel slot with three rows and just five fixed paylines; the basic design is recognisably a Novomatic one and there are some simple mechanical slot sounds to accompany your gameplay.

Fruity symbol are the order of the day and here we have watermelons, plums, lemons, grapes, oranges and cherries; there are also gold sevens and these are a little special because they don’t need to start from the left hand side to win, although they do need to be in adjacent reels.

There’s no wild but there is a star scatter symbol which will pay out for at least three anywhere in view.

The default gameplay is to use five reels but there’s a sixth available if you’d like to liven things up a bit; just click the Extra Bet button in the top right hand corner and the reel on the far right will become active.

Using the sixth reel will double your total bet but it will of course allow wins of six symbol rather than five for improved payouts; the number of paylines will not increase though. The maximum payout increases to 1500x the line stake from 500x when using this option.

Sizzling Hot 6 is remains a fairly basic slot despite the addition of the sixth reel option but Novomatic games have their audiences and this will surely be the same; it comes with an RTP of 95.09%.