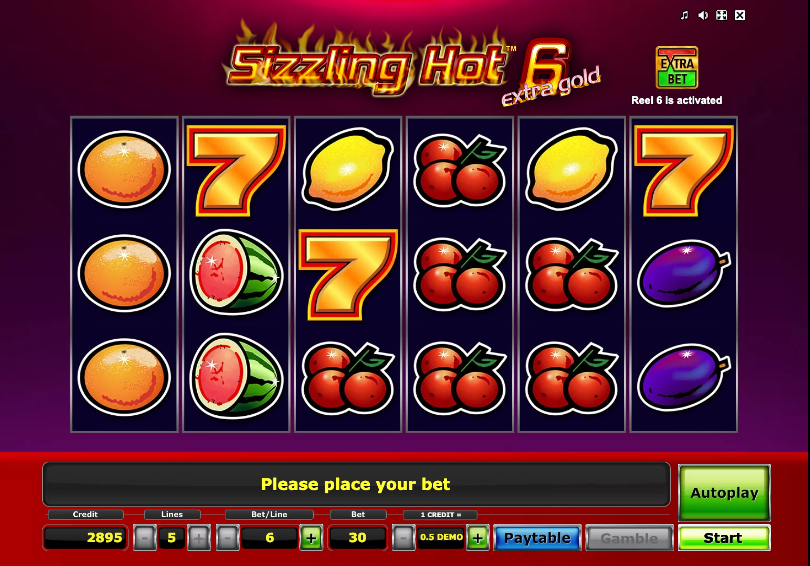 If your idea of an entertaining online slot machine is ‘basic plus one extra reel’ then we may well have something for you here; it’s called Sizzling Hot 6 Extra Gold, it’s developed by Novomatic and what it lacks in bonus features it makes up for in 20% more reels!

Sizzling Hot 6 Extra Gold starts out as a five reel slot with three rows and just five fixed paylines; the design is about as basic as it’s possible to get with reels full of fruity symbols spinning against a purple backdrop. Mechanical noises and simple sound effects accompany the gameplay.

You’ll recognise the symbols in play here as the primary elements of a fruit salad such as watermelons, plums, lemons, bunches of grapes, oranges and cherries; the glowing seven will pay on adjacent positions anywhere in view while the gold star is the scatter which will pay for at least three anywhere in view.

Now for the feature which gives Sizzzling Hot 6 its name and it’s the sixth reel which can be switched on by clicking the ‘Extra Bet’ button in the top right of the screen; it won’t increase the number of paylines but it will double your stake and allow paylines of six rather than five for wins of up to 4x greater value.

Any wins can be gambled following the spin and this is a simple 50/50, red/black choice to double your money (or lose those winnings).

Perhaps Sizzling Hot 6 Extra Gold will appeal to some players but we’re struggling to find much attraction in this very basic slot machine with average looks and minimal features.