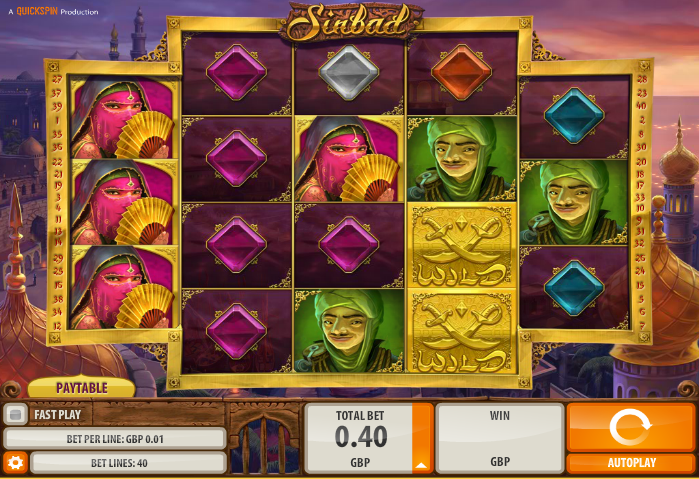 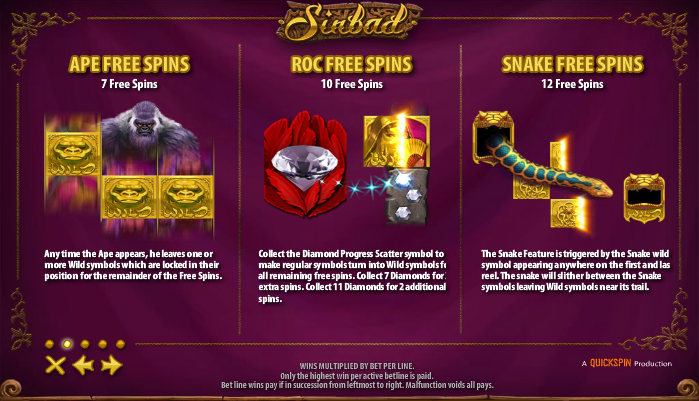 It’s been a while since we’ve reviewed a brand new game from Quickspin and consequently we were suitably excited to check out Sinbad. Sinbad is of course the fictional heroic sailor and veteran of numerous voyages emanating from his Middle Eastern home. Read on to find out more about this online slot which makes full use of the legend of Sinbad.

Sinbad plays out over five reels and forty paylines and as you can see from the screenshot above reels one and five contain only three positions while the centre three have four.  A lovely Middle Eastern background containing golden minarets occupies the background and there’s an appropriately suitable musical accompaniment.

The low value symbols a different coloured gems – green, orange, grey, blue and purple but the higher values are theme-related. They include a range of characters complete with some magnificent facial hair – except the lone female. All symbols can be stacked in the base game except for the scatter.

The wild symbol is a golden, crossed swords logo and the scatter symbol is the ship.

Landing three of those ship scatter symbols on the reels will trigger the free spins but once that’s done you will be offered the following choices:

While each of the free spins options will return the same profit to you on average, we prefer the Roc option and the possibility of winning more spins by collecting diamonds.

This is a great slot which is entertaining to play, sounds good and offers a range of compelling options when you trigger the main feature. It’s by far the best of this particular genre which includes solid offerings such as Net Entertainment’s Arabian Nights.