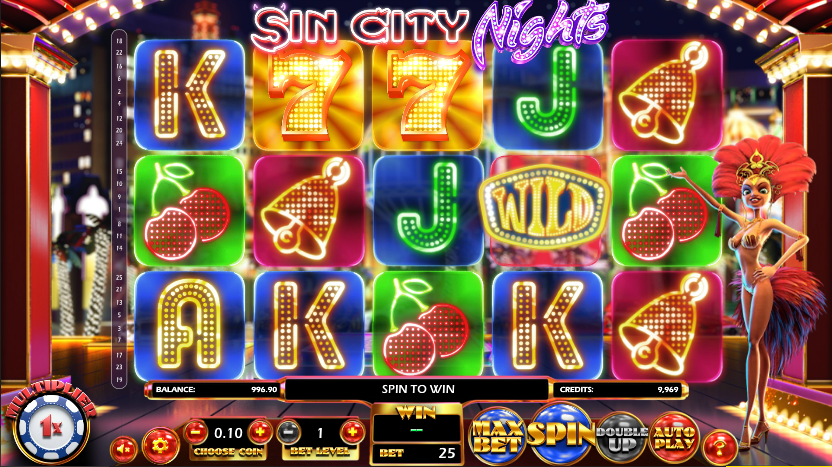 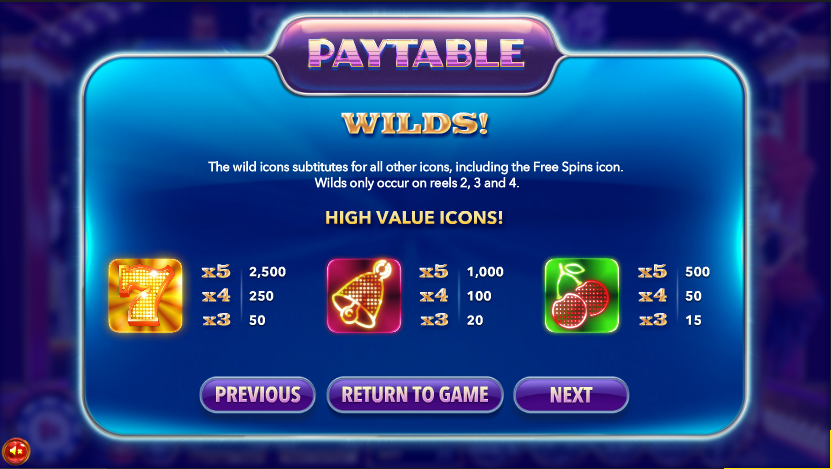 We’re all gamblers to one degree or another and so at some point we should all visit the global home of the casino – Las Vegas. We can go separately or altogether, it doesn’t really matter but in the meantime we can get a little bit closer by playing Sin City Nights, a great-looking online slot from Betsoft Games – read all about it here.

Sin City Nights is a five reel slot with three rows and twenty five fixed paylines; it’s all neon lights and fruit and the reels spin in the porticoed entrance of a glitzy casino while a scantily clad dancer accompanies you from the sidelines.

The symbols are traditional but lit in neon and include gold sevens, bells and cherries; lower values are represented by the standard J, Q, K and A.

The wild symbol is a big golden ‘Wild’, it appears only on reels two, three and four and it will substitute for all others to form winning combos including the Free Spins icon.

This is a nice feature and one which appears under various names in other slots; each winning combo will explode and disappear after the payout, allowing more to fall into their places for more potential wins. Each successive win will increase the win multiplier – 1x, 2x, 3x and then 5x.

This is triggered by landing three of the Free Spins icons on reels one, two and three on an active payline; you will receive ten free spins and the Exploding Icons will award increased win multipliers of 3x, 6x, 9x and 15x.

Any base game win can be gambled by clicking on the ‘Double Up’ button below the reels; you can now try and double that win as many times as you like (until you lose) by guessing heads or Tails.

Betsoft rarely fail to hit the target and Sin City Nights is one more very high quality slot which is colourful, enjoyable and occasionally lucrative – don’t pass it by!