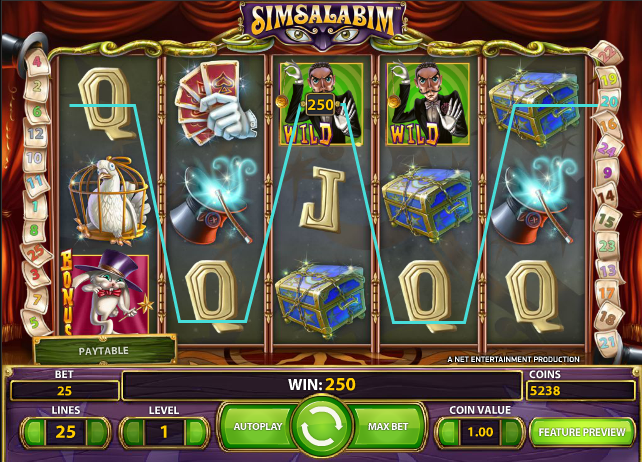 As every fan of stage magic will know there are a number of stock phrases magicians historically used to convey mystery to their audiences; everyone is familiar with soundbites such as Hocus Pocus, Open Sesame and Abracadabra but perhaps not so many with Sim Sim Sala Bim.  That’s not surprising as it originated from a show called The Adventures of Jonny Quest and were spoken by a character called Hadji but the sentiment remains the same.

So to the Simsalabim slot from Net Entertainment; an exciting looking offering from the company which rarely disappoints.  It’s a five reel and twenty five payline game which is based around magic and it looks great; the lower value symbols are the standard playing cards but the higher value symbols are all magic-related.

Hence we have playing cards, a confused-looking bird in a cage, a locked Houdini-style suitcase and a magician’s top hat and wand.  Special symbols are a magical cube scatter symbol, a hypnotist wild symbol and a magic rabbit bonus symbol.

Landing three, four or five scatter symbols will trigger ten, twenty or thirty free spins and any wins you get during this phase will attract a 3x multiplier.  More free spins can be won within the free spins game.

To trigger the main bonus game you will need to land three or more of the magic bunny symbols on three successive left to right reels.  You will then be transported to a screen featuring twelve magic top hats and a disembodied hand with a wand – all you need to do is guide the hand around and pick hats containing a rabbit for cash rewards.  Carry on doing this until you click on a hat containing nothing at which point the bonus round ends.

If there’s one small complaint we have it’s that we’d perhaps like more bonus features but that doesn’t detract from the playability of Simsalabim.  There are lots of betting options from €0.01 per payline all the way up to €250.00 with everything maxed out.