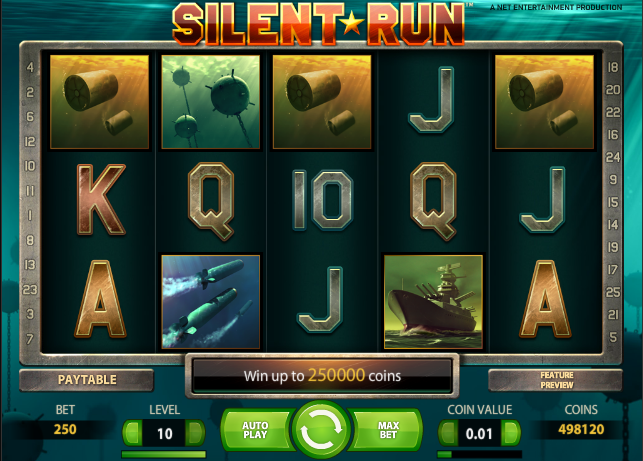 Silent Run is an atmospheric new online slot machine from Net Entertainment which transports the player into the claustrophobic, subterranean world of submarine warfare;  it’s a great theme for a slot and Net Ent add their usual quality graphics to the proceedings to create a memorable game.

The game feels like it’s set in the second world war and it’s clear from the backdrop that the action is taking place underwater and the five reels and twenty fixed paylines feature a number of submarine-related images.  Low value symbols are the standard playing cards but the high value ones are depth charges, mines, torpedoes, a battleship and your submarine.  There’s also a red lamp wild and green and red sonar symbols which contribute to the bonus features.

If you are lucky enough to land the green Echo Bonus symbol on reel three you will trigger the Silent Run bonus game.  In the first stage the Echo symbols will fire out three sonar signals to detect torpedoes.  The number of torpedoes found (between two and five) will go with you into the next stage.

Now’s your chance to torpedo some ships with your previously-won weapons.  Each torpedo you fire has a multiplier value attached to it and each ship you hit is worth a cash value which will be subject to the multiplier.  If you manage to grab all five torpedoes some big money will be waiting for you.

Landing a red Echo Wild on reel three will trigger the smaller bonus feature; again the sonar sends out three signals but this time reveals a random number of hidden wilds on the reels.  The sonar wild and the new wilds all become instantly active, hopefully creating some winning combos for you.

Net Ent has created a game with some real atmosphere and it’s well worth trying out, whatever your budget.  The animation for the bonus game is consistent with the high quality we have come to expect from this company. The paylines are fixed so players can bet from £0.25 per spin up to £125.00.