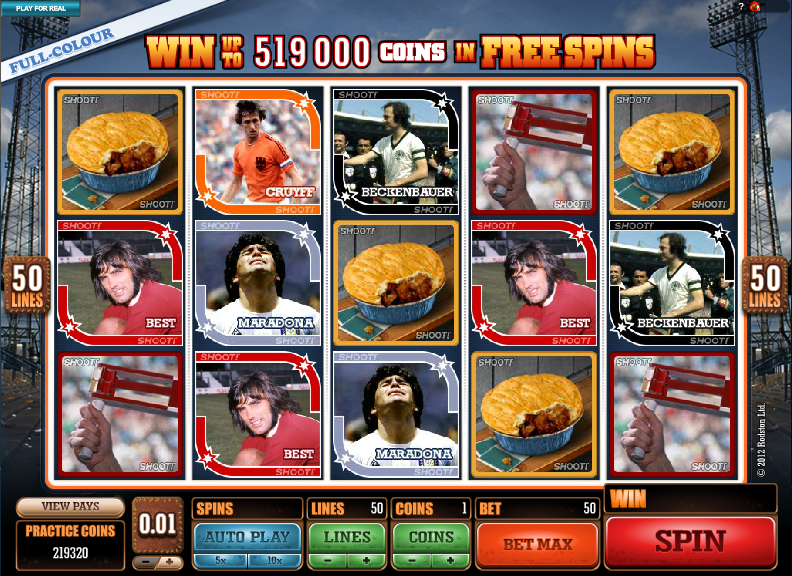 Way back in 1969 the magazine Shoot! began publishing; it covered all aspects of English and Scottish football and at its peak it sold more than 100,000 copies per week.  It’s now an ‘app only’ publication but it’s iconic status for football fans of a certain age means it’s a great theme for an online  slot machine.  Microgaming have done a fantastic job here of bringing that 1970’s style to the reels.

Shoot! also uses the trend for trading cards as part of it’s attraction and that’s a great addition to this slot which will be familiar to those who were kids in the 1970s and 1980s in particular.

It’s a five reel and fifty payline slot which uses as it’s symbols a number of classic trading cards including Kevin Keegan, Johann Cruyff, Diego Maradona, George Best, Pele and Franz Beckenbauer.  Other symbols include a meat pie and a rattle.  As you might expect the sound effects feature plenty of cheering crown noises. 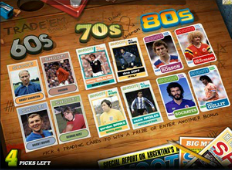 The Trade ‘Em feature is triggered from the base game by landing three, four or five of the bonus symbols anywhere on the reels.  You now get to pick four from a set of twelve player cards.  Cash prizes are available here but you should also be on the lookout for what the game calls ‘second level bonuses’.

Choose the right card here and you can get to play Free Spins and the Magazine Bonus.  If you get lucky and choose one of those cards you’ll go straight to that game – any remaining picks will be completed when the second level round is over.

Similar to the Trade ‘Em bonus, you will be presented with twelve magazines but here you get to continue picking and revealing prizes until you find a red card.  Two of these cards are among the magazines and they mean an instant end to this bonus game.

If you pick the free spins card you’ll receive between 10 and 35 depending on the outcome of a random  spinner.  Just click ‘Spin’ to start the reels spinning.

This slot will be of particular interest to slot fans of a certain age – the 70s haircuts, the meat pies, what’s not to like?   Add some clever bonus games and a cheering crowd soundtrack and this is a game not to be missed.