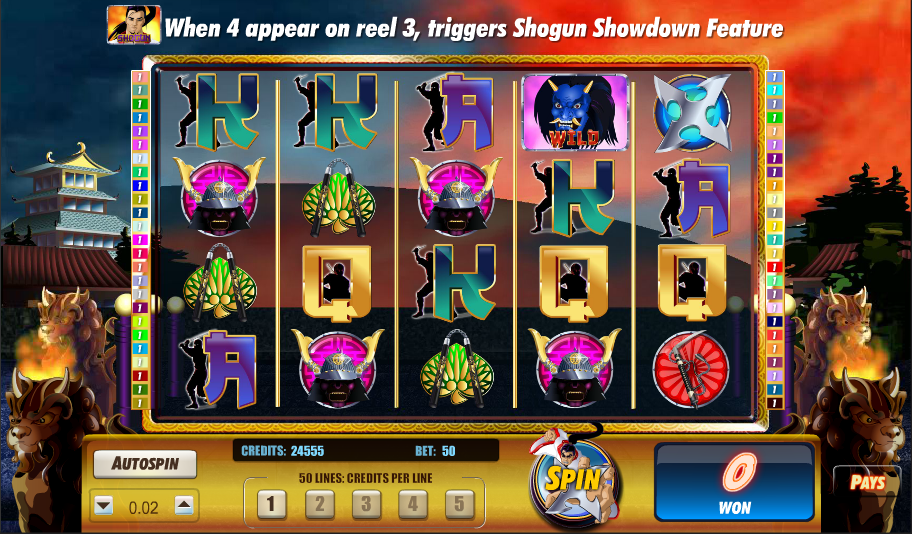 The famous shoguns of Japanese times past were in fact the rulers of their specific regions; for hundreds of years they effectively ruled the country under the nominal power of the emperor. These warrior chieftains would almost certainly be delighted to know that, centuries after their existence, they became the subject of on online slot machine. This one’s called Shogun Showdown and it’s developed by Amaya Gaming.

Shogun Showdown is a five reel and fifty payline slot featuring several of these shogun characters. The reels are transparent and the view through them is of a Japanese landscape moving inexorably towards night-time.

The main symbols in the game are related to the theme and include nunchucks, a horned helmet, a sword and a throwing star. Ace, King and Queen make up the remainder of the lower value symbols.

A scary blue mask is the wild and the two shogun are both bonus symbols which activate their own features.

The shogun character you can see to the right is needed to trigger this feature; you will need to land him anywhere on reels one, three and five on the same spin and for that you will receive ten free spins.

Unfortunately you cannot trigger the other bonus game from within this feature but you can win more free spins by landing more shoguns.

The other shogun character (right) is a bit more interesting and during all gameplay he will change into a random symbol every time he lands on the reels.

There’s more though and if you can land four of him on reel three a separate game will begin. That reel will be held for four spins and during those spins any more shogun symbols which land will also be held in place. When the spins are complete, all the held symbols will change into another symbol, hopefully resulting in some nice wins.

This is a pleasant enough diversion; it may be a little long in the tooth now but the two separate bonus games differentiate it a bit and the background music is suitably Japanese.