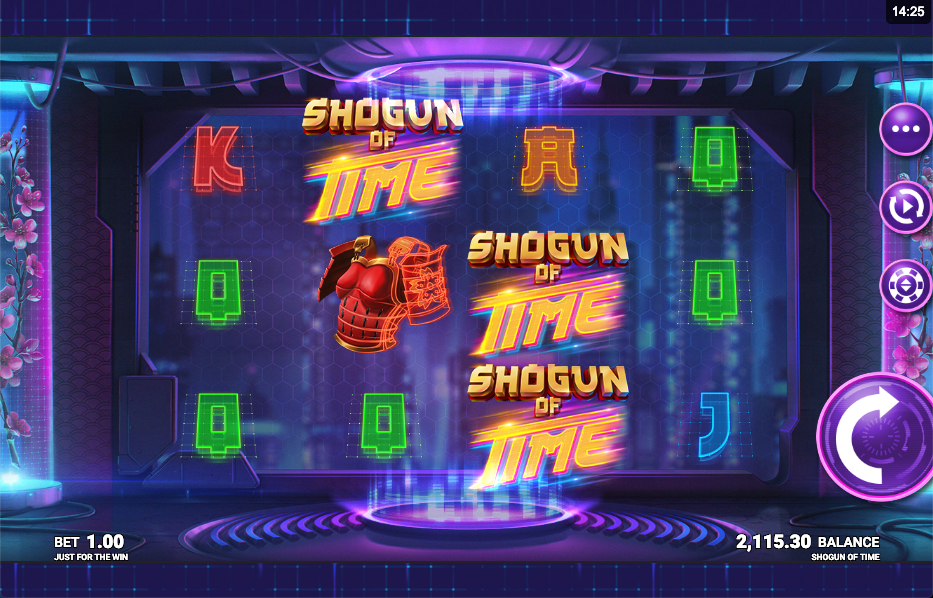 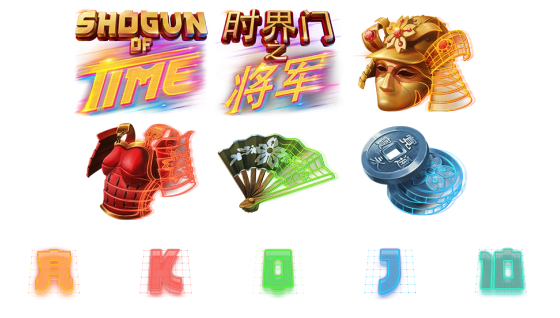 The twin themes of science fiction and the mysterious East come together now as we check out this online slot machine from Just For The Win; it’s called Shogun of Time and its’ futuristic gameplay will award Reel Split Respins and up to sixteen free spins.

Shogun of Time is a four reel slot with three rows and eighty one ways to win – there’s no payline structure and wins are formed as long as there are matching symbols on adjacent reels starting from the left hand side. The action begins in some sort of time-travelling lab behind which there’s a cityscape at night.

The high value symbols include the games’ logo, the shogun’s mask, her breastplate, a green fan and a stack of silver coins; 10, J, Q, K and A represent the lower values.

The shogun herself is wild and she’ll substitute for all others to help create winning matches except for the pink flower scatter symbol.

It’s not something to try and say after a few drinks but the Reel Split Respin can be awarded after any four of a kind win; an extra reel (the time machine) will appear as the third reel and it will spin on its’ own to reveal identical symbols, hopefully resulting in a win. The number of paylines increases from 81 to 243.

This is triggered by landing three of four of the pink flower scatter symbols anywhere in view for which you will receive 8 or 16 spins respectively; the extra reel appears again during this round but this time it’s completely wild for the duration of the feature. In addition wins can be formed from right to left as well as left to right.

The cartoon-style graphics, the engaging background music and the creative bonus features all add up to another enjoyable slots experience from JFTW; the fast-moving action contrasts with the gentle pace of the music for a top-notch time.