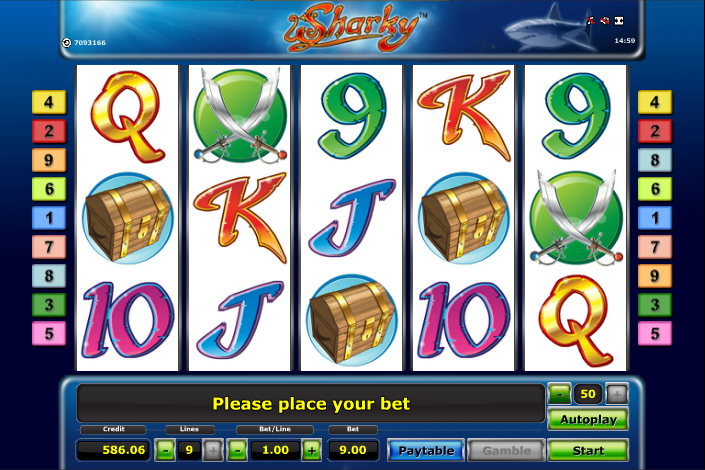 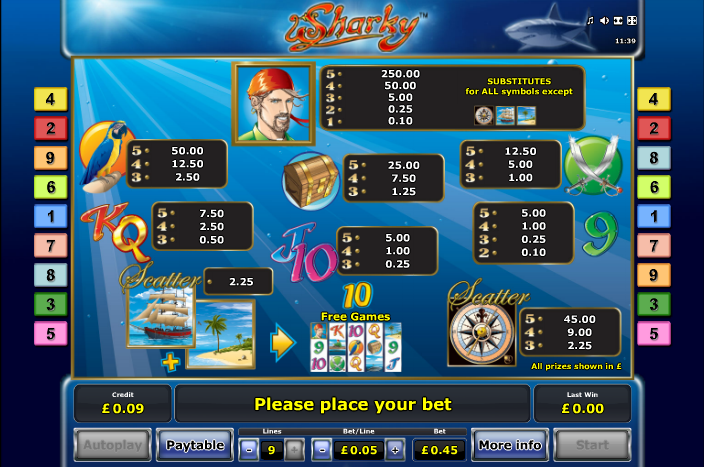 You can’t go too far wrong with an online slot based on pirates and buried treasure; chuck in some sharks as well and surely you’ve got a winning combination. That’s the idea behind Sharky anyway, a nautical release from Novomatic with a free spins feature and an opportunity to gamble any of your wins.

Sharky looks like a typical Novomatic game and it features five reels and just nine paylines. The reels are set underwater and three’s a faintly menacing-looking shark swimming about near the top of the screen. Daylight just pierces the briny depths from the top left hand corner.

Some basic playing card symbols make up the lower values on the reels but the higher value ones include a pair of cutlasses, a treasure chest and a parrot.

There are three scatter symbols – a compass, a ship and an island and the latter two are the key to activating the bonus feature. The pirate himself is the wild and will substitute for all symbols except the scatters.

To trigger this slightly in-depth feature you will need to land the pirate ship on reel one and the desert island on reel five; for this you will receive 10 free spins.

During the spins, each time you land another ship on reel one the pirate will be lowered into the water and start to row across the screen. He acts as a wild and moves one reel to the right with each spin unless attacked by a shark.

If a treasure chest lands on the pirate or next to him in any direction he will swim out and grab the prize inside.

As you can see from the video below, the spins can be re-triggered if you land the scatters in the right place again.

After any win you can gam be that amount by clicking the ‘Gamble’ button underneath the reels; you will now get to play a game where you can double your win by predicting the next card’s colour or quadruple it by picking the correct suit. Lose and it’s all over.

We always advise using the gamble feature with caution; wagering every win is the surefire way to lose your money very quickly unless you somehow beat the odds and make several lucky picks.

This looks like a typical Novomatic slot but it’s certainly enhanced by the free spins feature and the way the pirate rows around on the reels. We played this game for longer than we thought we would.