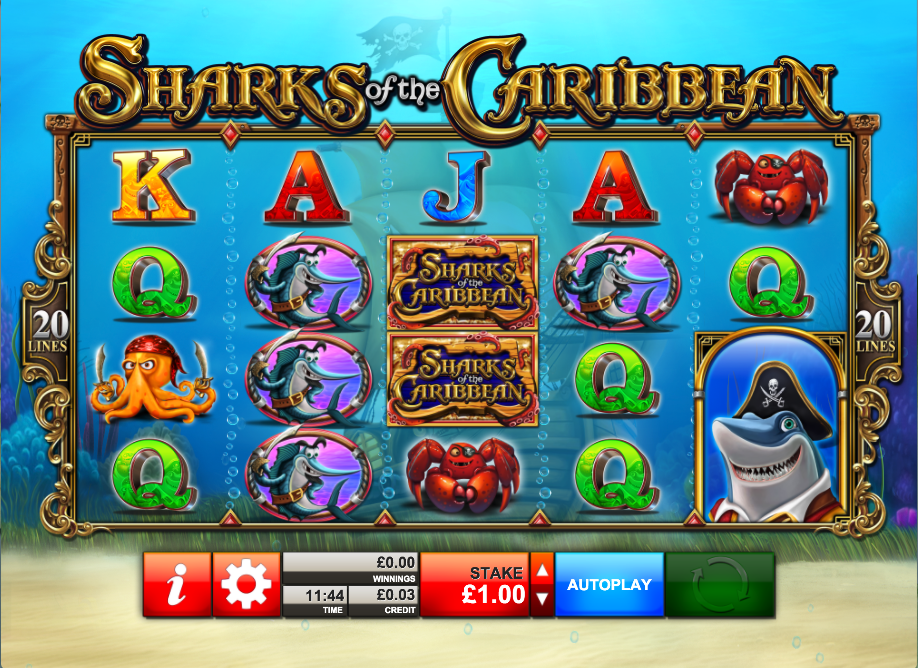 The ocean depths are our destination now as we check out this online slot from Reflex Gaming with a full complement of piratical sea creatures; it’s called Sharks of the Caribbean and it comes with plenty of fishy free spins.

Sharks of the Caribbean is a five reel slot with four rows and twenty fixed paylines; the golden reels are very ornate and float against a backdrop in which we can just about make out a sunken pirate ship with the tattered Jolly Roger drifting in the warm Caribbean currents.

The high value symbols include the game’s logo; a pirate ship, a swordfish, a cutlass-wielding octopus and a crab; j, Q, K and A make up the lower values.

The stacked shark captain is both the wild and the bonus symbol, it appears on reels one and five in the base game and it will substitute for all others to help form winning combinations.

This is triggered by landing the shark wild/bonus symbol completely in view on reels one and five for which you will receive an initial eight free spins; as the spins progress, more stacked sharks will be added to reels two, three and four which should make big wins more likely as you get to the end of the round.

This can occur randomly at any point during the base game and more shark bonus symbols will be added to reels one and five, making it more likely that the free spins will be triggered.

Sharks of the Caribbean doesn’t really add much to the large shoals of underwater-themed slots already out there but it’s good fun in quite a basic way with it’s cheerful fishy characters and two bonus rounds – it comes with an RTP of 95.00%.