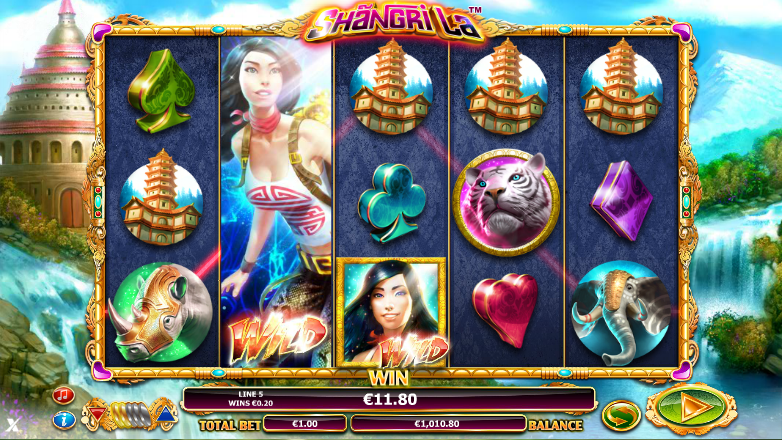 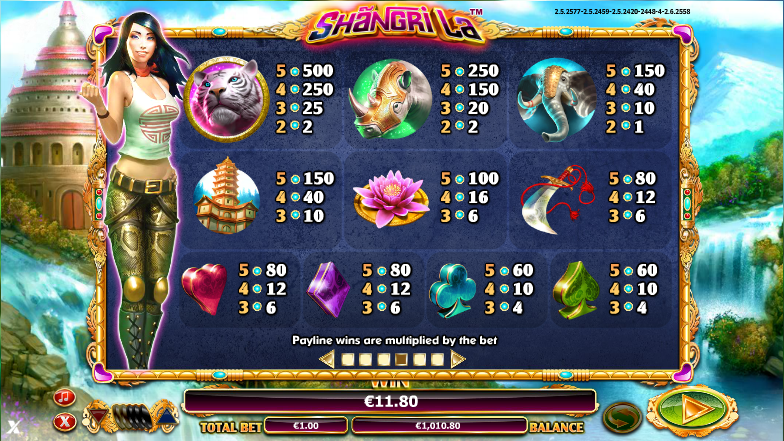 The author James Hilton first introduced us to the mystical land of Shangri-La in his 1933 novel Lost Horizon and it’s a name which has made it’s way into popular culture in many forms over the decades; Shangri-La is also the name of this online slot machine developed by NextGen Gaming and you can read all about it below.

Shangri-La is a five reel slot with three rows and fifteen fixed paylines; the ornate golden reels sit against a backdrop of lofty Himalayan peaks, crashing waterfalls and perhaps the famous lamasery (temple) from the story.

There are six theme-related symbols and these include three animals from the realm – a tiger, a rhino and an elephant, a temple, a lotus flower and a sword; 3D playing card symbols represent the lower values.

The girl is the wild symbol, she appears on reels two, three and four and she will replace all others to form winning combos except for the golden ornament scatter icon; she will also double any wins to which she contributes.

On any spin there’s a chance that:

This is triggered by landing three or more of the golden scatter symbols anywhere in view and you will now get to spin a wheel which will determine one of four features:

Both free spins features can be triggered again by landing more scatters during the round.

Gamble any win by clicking the hearts/clubs button to the right of the reels; now try and double/quadruple that win by picking the correct colour or suit. Get it wrong and you’ll lose it all.

Shangri-La makes the most of an interesting and exotic theme and there’s rarely a quiet moment when you spin the reels; the random features occur frequently and the Shangri-La bonus has a lot to offer. This game comes with an RTP of 96.63%.