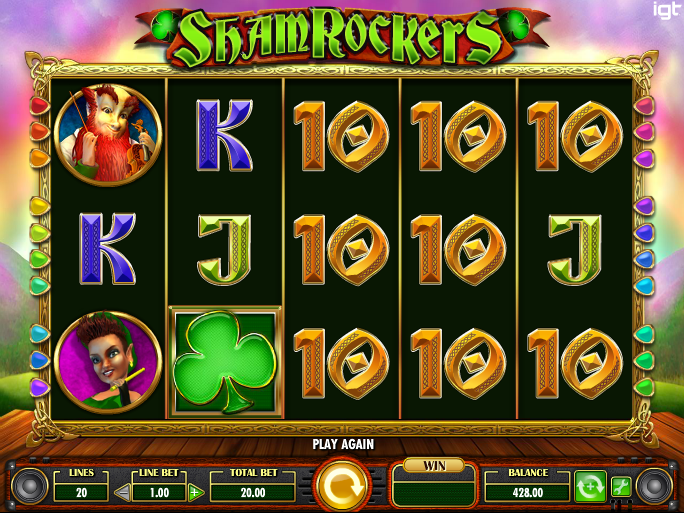 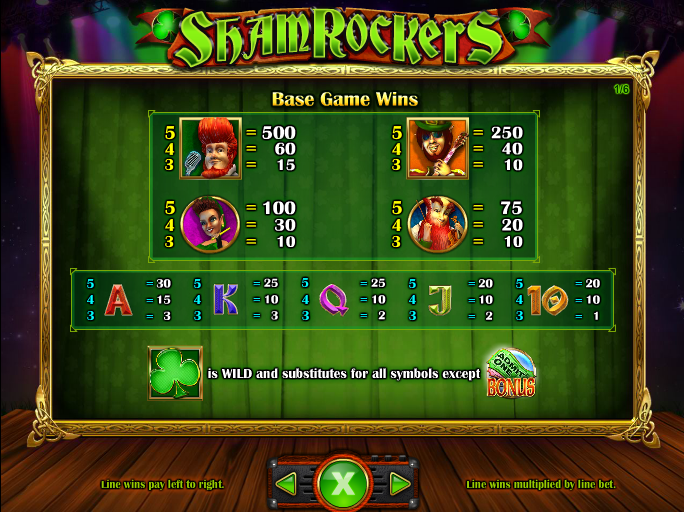 The full title of this funky online slot from IGT is Shamrockers Eire To Rock and if you think that Shamrockers is a great name for an Irish band then you’re in good company – a quick internet search will tell you that there are many dotted around the world. Back to this game then and it’s an Irish-themed affair  which follows one particular band and their attempts to trigger some free spins for you.

Shamrockers is a five reel slot with three rows and twenty fixed paylines; it looks like the reels are set on a stage and as part of the bans we’re looking out onto a typically Irish scene of rainbows and green hills.

The four high value symbols are the band members and comprise the red-bearded singer, the female drummer, the fiddler (also with a  red beard) and a shades-sporting guitarist; 10, J, Q, K and A make up the lower value symbols.

The three-leafed clover is wild and will replace all others in a winning combo except the bonus ticket scatter which activates the main feature.

This is triggered by landing three of the ticket scatter symbols anywhere on reels two, three and four; you will receive four free spins which may not seem like many but there’s an extra aspect to the spins.

On each spin a different predetermined character will be stacked across all reels to make winning s little easier:

Additionally on the last spin you may be lucky enough to land a golden VIP ticket and if you do the four spins start again; the golden ticket only appears on reel five.

Surprisingly there’s no base game Irish music soundtrack to this game but sometimes that’s a blessing in disguise; you will get a brief solo when you land a winning combo of a particular musician. Anyway it’s good fun with a brief but creative free spins round and an RTP of 92.19% – 96.20%.