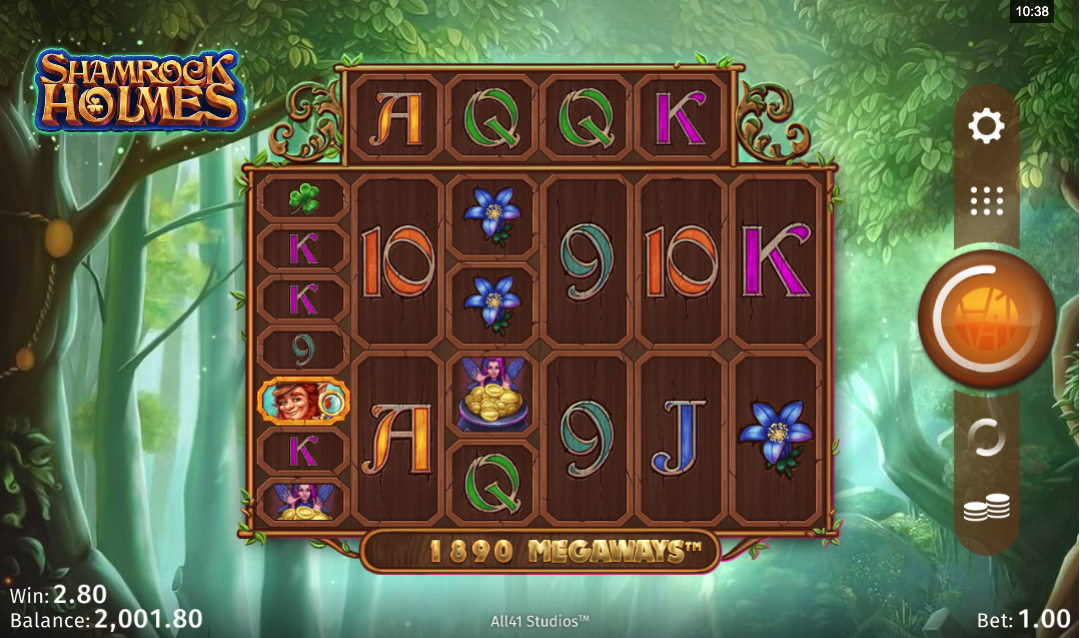 The Megaways gameplay mechanic shows no signs of decreasing in popularity and it returns here in Shamrock Holmes; this Irish-themed online slot is developed by Microgaming/all41studios and it tempts players with rolling reels, free spins, the Magic Forest respin and a potentially huge number of paylines.

Shamrock Holmes Megaways is a six reel slot with up to seven rows and an extra horizontal reel at the top – with sevens rows on each reel there will be 117,649 paylines. The setting is a misty, mystical forest in keeping with Irish legend.

High value symbols include the leprechaun detective, the pixie/pot of gold, the clover and the blue flower; 9, 10, J, Q, K and A represent the lower values. The golden ‘W’ is wild and the coins are the scatter symbols.

Every symbol involved in a winning combo will disappear and allow more to fall in from above; the process can then continue to hopefully create more wins.

Landing at four of the gold coin scatter symbols anywhere in view will award an initial ten free spins with an two more for every extra coin; you’ll start the round with a 2x win multiplier but this will increase by 1x with each rolling reel combo. There’s no upper limit to this multiplier.

If you can get three or four coins on the horizontal reel during this round then three or four extra spins respectively will be awarded.

There are two levels to this feature and these are the ways to trigger them:

This tribute to the great Victorian detective is good stuff and it’s got a bit of everything – rolling reels, Megaways, a classic theme and two bonus features to keep things ticking along. It also comes with a refreshingly high RTP of 96.44%.