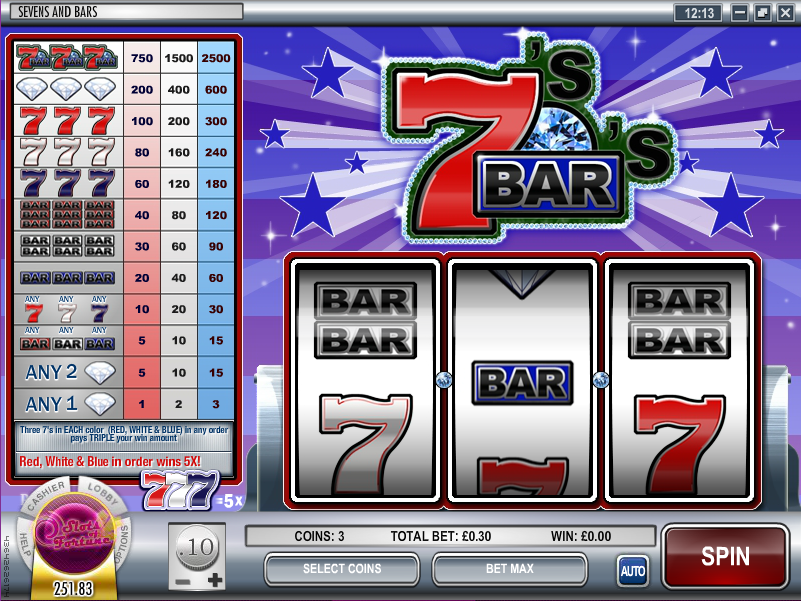 At first glance, Sevens & Bars may seem like one more online slot without much of a theme aside from celebrating the use of two of the most common and traditional symbols. Look a little closer however and you will start to see American themes in the background. The dramatic stars, the red, white and blue – both symbols of Americana or at least that’s what we think. Back to the game then and this classic slot is from Rival Gaming so read on to find out more.

Sevens & Bars is a three reel machine with a solitary payline and like all Rival classics, it’s designed in a nice clear style with plenty of colour. The big paytable occupies the left of the screen while the reels sit atop some brushed metal in the centre. The game’s dramatic logo blasts out from above those reels.

The symbols are mostly traditional her and include diamonds, single/double/triple bars, red, white and blue sevens and finally a symbol which combines the seven, diamond and bar.

Any one or two diamonds in view will win you single or double your stake respectively. Red, white and blue sevens in order will pay 5x your stake.

The first thing to do is set your stake by using the ‘+’ and ‘-‘ buttons underneath the paytable. That provides the base stake which you can then double of triple by selecting to use two or three coins. Before you decide against using three coins, bear in mind that the prizes increase disproportionately; for example the payout for three jackpot symbols is more than 3x the payout for one coin.

You can still bet with the relatively low stakes of £0.30 even if you are using the maximum coin level.

We like these Rival Gaming classics; they’re good to look at and smooth to play and by using three coins you can give yourself that extra chance of landing the big bucks.