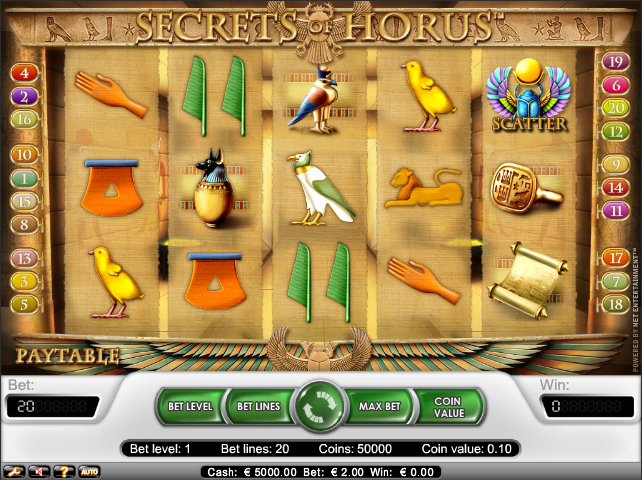 If you’re looking for an online slot machine based on ancient Egypt then you’re in luck; there are more than a few games with that theme available to play at various casinos and in the past we’ve reviewed examples such as Throne of Egypt, Crown of Egypt and Egyptian Heroes.  Net Entertainment are adding to the list here with Secrets of Horus and there’s always room for one more game in a particular genre – as long as it’s a good one.

Secrets of Horus is played out over twenty paylines and five reels and behind those reels we can see the entrance to a tomb which is perhaps the hiding place of those secrets. The symbols are of a similar nature to those in other Egypt-themed games so we have a range of hieroglyphics, papyrus scrolls, an ornate ring and the Eye of Horus itself.

The scarab beetle is the scatter symbols which activates the free spins and there’s a wild which is represented by Horus himself.

The wild symbol offers a little extra here and if you can land it in a winning combination in the base game it will multiply your prize by two.

There’s a fairly standard free spins round available in this game and this one is triggered by landing three or more of the scarab beetle scatter symbols anywhere on the reels.

Achieving this will reward you with fifteen spins but that’s not all – any wins you land during this phase will be multiplied by three so it can be a profitable round.

If you’re just playing this slot for the feature then you can use as few paylines as you wish – the scatters will trigger the free spins anyhow. Prizes will be proportionately less though.

Among the glut of Egypt-themed slots this is certainly not the best; it certainly looks nice but that’s not quite enough to be able to recommend it without hesitation.