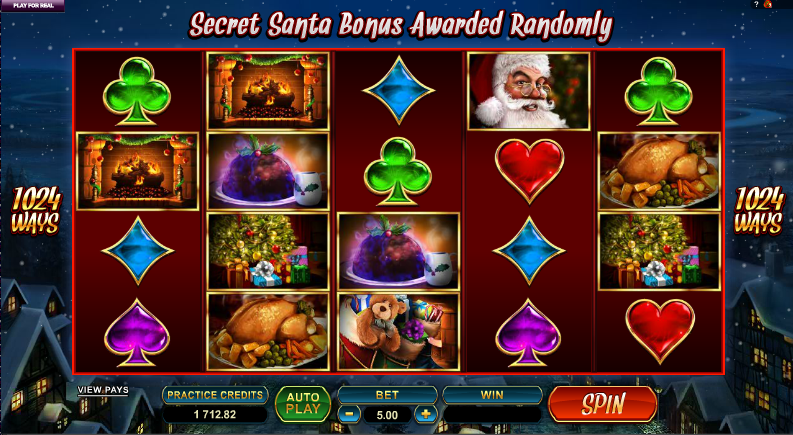 It’s that time of year again and Christmas is approaching with an inevitable regulatory; of course that’s only try if you’re reading this review at the appropriate time of year but either way, Secret Santa is a brand new online slot from Microgaming with a shedload of Christmassy bonus features and a a festive soundtrack.

Secret Santa showcases some fantastic graphics across it’s five reels and 1024 paylines.  So many paylines means that you’ll win with matching symbols in adjacent columns rather than in specific patterns.

Snow-covered houses and fields make up the background to the reels and there’s a Hollywood-style soundtrack to the game which may be a little cheesy for some but it’s appropriate nonetheless.

Not surprisingly there’s a range of Christmas icons which make up the main symbols and these include a Christmas pudding, a trimmed-up turkey, some stockings, a fireplace, gifts under a tree and Santa himself.

The Secret Santa symbols is wild and there’s a Christmas cracker scatter symbol which pays in any position. There are no bonus symbols in this game because that feature is awarded randomly.

As we just mentioned, the seven bonus features are awarded randomly and you’ll see a big present appear on the screen which will reveal your bonus as follows:

Five Of A Kind Feature

If you land a winning combination of five symbols (not including wilds or scatters), you will be paid out and then see that the symbols will turn into another random set of matching symbols.  Essentially it’s two five-of-a-kinds in a row.

For those who like this sort of thing, you can track which wins you’ve completed on the payout table; these are saved even if you leave the game.

The paylines are fixed and everything else is random so we’ve very little to offer here except to say keep the music on to get yourself in the Christmas spirit.

The lack of interactivity is the only minor drawback in a really entertaining, high quality game.  Of course it’s been released just in time for Christmas but it’s good enough to play all year round.