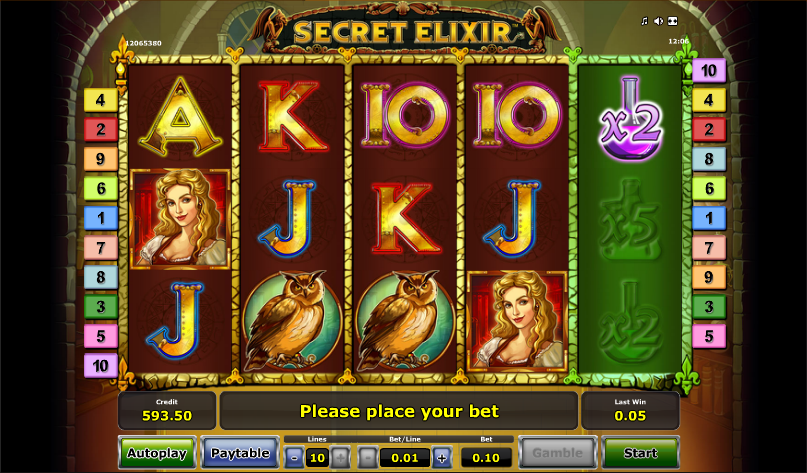 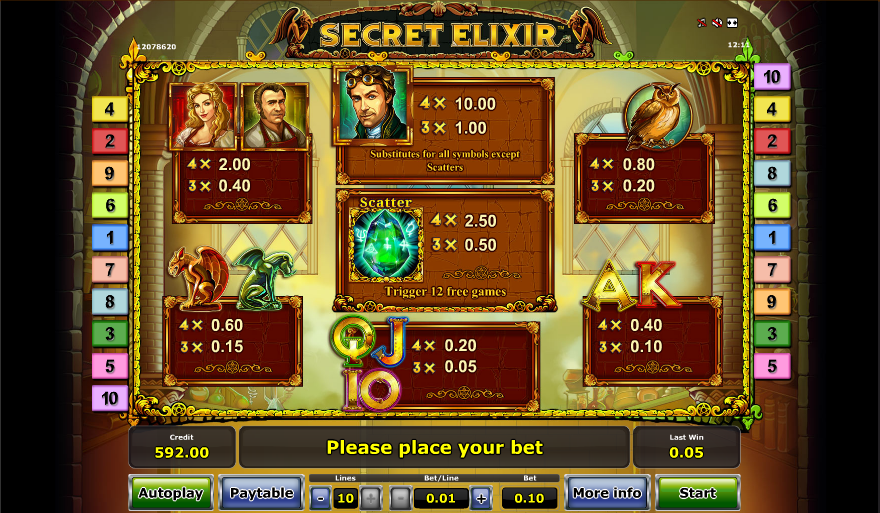 The Philosopher’s Stone is one of those legendary substances rumoured to hold various magical abilities. It could turn base metals into gold or offer immortality and it’s the focus of Secret Elixir, a rather Gothic online slot from Novomatic. Unlike most Novomatic games, it also includes an innovative multiplier feature which sets it wart from other releases.

Secret Elixir is a five reel and ten payline game and the 19th century setting is demonstrated by the decorations framing the reels and the backdrop of gloomy stone hallways.

The standard 10, J, Q, K and A are the low value symbols but the high value ones are more interesting and include two gargoyles, an owl and male and female characters.

The wild symbol is a chap with goggles and the glowing free Philosopher’s Stone is the scatter which activates the main feature.

As soon as you load up the game you will notice that reel five looks a bit strange; that’s because all it contains are multipliers. in terms of the paylines it acts just like any other symbol in that it must be part of the winning line to be active. When it is in the right place it will reward the player with a multiplier of either 2x, 3x or 5x.

Veterans of Novomatic slots will not be surprised to find a free spins feature here and it’s triggered by landing three or more of the green Philosopher’s Stone scatter symbols anywhere on the reels.

You will now have the pleasure of twelve free spins and the really good news is that the values of the multipliers on reel five will be increased to 2x, 3x, 5x, 10x and 20x. Any wins will be guaranteed to land a multiplier also so this can be a valuable feature.

Most wins can gambled by clicking the ‘Gamble’ button below the reels; here there’s a simple game in which you try to predict whether the next card drawn will be red or black. A correct answer will double your money. Your maximum stake will depend on your total line bet.

Watch out for the temptation of the gamble feature – it will quickly take all of your money if you overuse it. Handle with care!

It’s nice to see that Novomatic have added some extra features here which are not often found in most of their slots. It looks good too and our only wish is that the sound could be improved a bit.