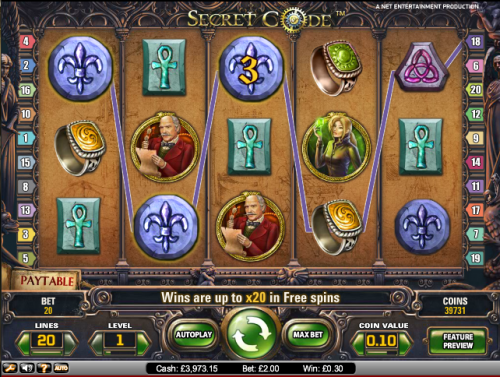 One suspects that author Dan Brown might have been part of the influence behind this online slot machine from Net Entertainment; the Da Vinci Code, Angels and Demons and the Lost Symbol all feature secret codes and symbology and those are the driving forces behind the Secret Code slot.

This five reel slot features twenty paylines and the reels spin in front of a piece of parchment containing various sketches – somewhat reminiscent of the drawings of Leonardo da Vinci.  All the symbols are related to signs and archaic symbols (no boring playing cards here) and we have blue, green and purple seals, green, yellow and red rings, an sand timer, a book & magnifying class, a blonde lady and a red-jacketed gentleman.

There’s a scatter symbol showing the letters X.O.R.N.S.T.O, a key in a lock which is a bonus symbol and mysterious hooded character wild symbol.

To trigger this game you’ll need to land the key/lock symbol on reels three, four and five and you’ll then be whisked to a screen showing five angels/demons and five keys.  Just drag the key of your choice to the chest being clasped by the character and you’ll either reveal an angel (cash prize) or a demon (win nothing).  Check out the video below to see it in action.

At the end of the free spins you will be given the chance to gamble your winnings in a similar game; you can gamble the whole amount or just half and you can keep going as long as you keep winning.  Losing ends the game.

This is a great-looking slot from Net Ent which clearly owes a small debt to Dan Brown but which is an excellent slot anyway.  The soundtrack is suitably religious and dramatic and the bonus games will keep you interested.