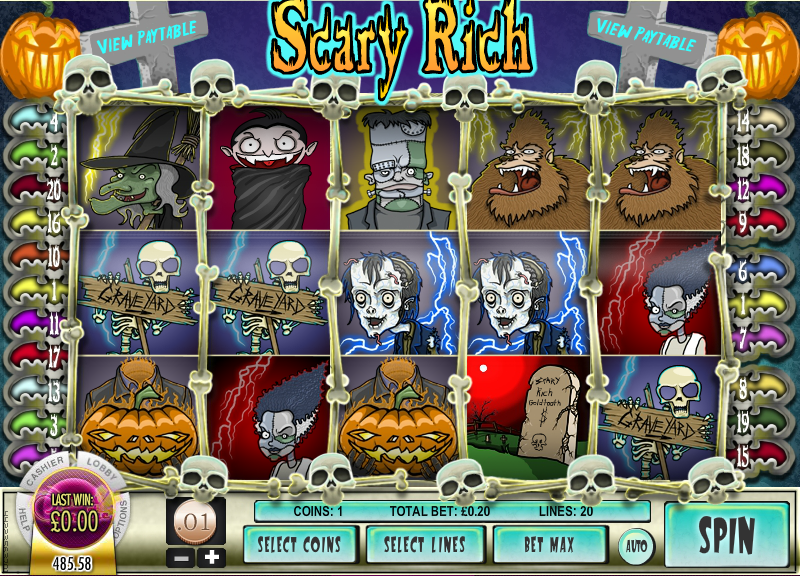 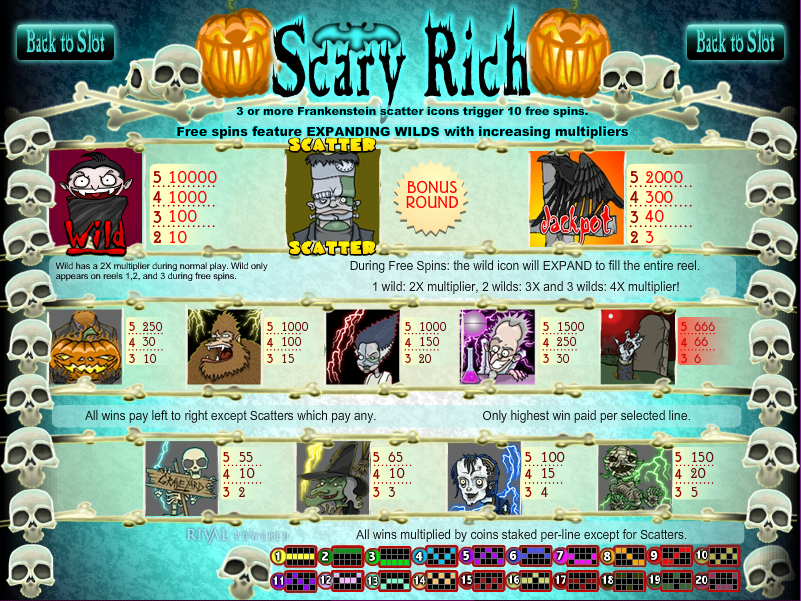 Is there such a thing as being scary rich? Can you have so much money that it terrifies you? Who cares – this online slot from Rival Gaming isn’t about any of that; it’s called Scary Rich because the theme is monsters, mummies and other creepy things. It’s ideal to play at Halloween or in fact at any other time you want a good fright.

Scary Rich is a five reel slot with up to twenty paylines and the whole thing is designed in a scarily amusing way. Skulls and bones frame the reels and eyeballs appear in those skulls when you press ‘Spin’. Pumpkins, headstones and creepy music add to the atmosphere.

The symbols all animate when they create a winning combo and include the mummy, Dr. Frankenstein, a witch, a skeleton, a zombie emerging from the ground, a mad scientist, a werewolf, a pumpkin and a raven.

The small dracula creature is the wild symbol and will multiply by 2x all wins to which to which it contributes in the base game. Frankenstein’s monster is the scatter symbol which activates the main feature.

Most Rival slots have two bonus features to trigger but here there is just one; you can win ten free spins by landing three or more of the Frankenstein’s monster scatter symbols anywhere on the reels.

During the spins the wild symbol only appears on reels one, two and three but when it does land it will turn that whole reel wild, helping to form more winning combinations.

Landing three more scatter symbols will add ten more spins to the total awarded and, as you can see from the video above, this does happen more than once. We landed thirty spins on this particular try.

If you just want to play for the free spins and your budget is low, just use one payline – you have the same chance of landing the scatter symbols.

We like this slot, the characters and animations are amusing and the music is a cut above the usual grating noises. It helps that the feature is easy to trigger but there is a pretty low RTP of 92.52%.