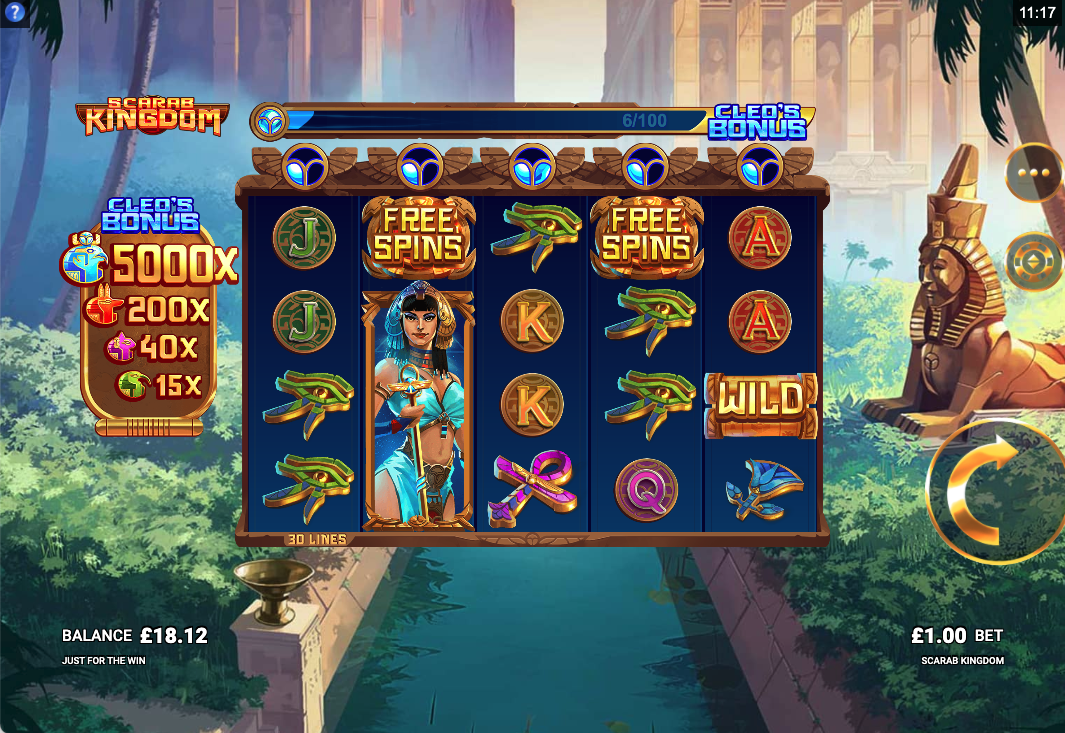 Some online slots follow explorers into the ruined tombs of ancient Egypt and others are like Scarab Kingdom which take us back to the heights of the Egyptian empire; it’s developed by Just For The Win and from £0.20 per spin it comes with Wild Scrolls, Cleo’s Bonus and Pharaoh’s free spins.

Scarab Kingdom is a five reel slot with four rows and thirty fixed paylines; the waterways, landscaped gardens and neat buildings stand in the shadow of the Great Pyramid to set the centuries-old scene.

High value symbols include the Pharaoh, Cleopatra (both can appear stacked), the green Eye of Ra, the purple cross and the blue flower; J, Q, K and A make up the lower values. The golden scroll is wild and the special symbols are the red and blue scarab beetles.

Every blue Scarab scatter symbol which lands on a particular bet level will fill up the Bonus Bar and when one hundred have ben scooped Cleo’s Bonus will activate; you’ll now get to play a picking game to reveal matching symbols for prizes which are worth 15x, 40x, 200x and 5000x the stake.

Above each reel is a Scarab Holder with three spaces and these are also filled by the blue Scarab scatters which land on that reel; once full a wild scroll will unfurl on that reel to occupy all positions, moving down one place with each subsequent spin.

This is triggered by landing three of the red Scarab scatter symbols anywhere on reels two, three and four; a wild scroll will be added to reel three and the reels will now spin until there are no scrolls left in view. Landing a regular wild symbol is enough to create a wild scroll in this round.

The win multiplier for this feature starts at 1x and increases by that amount with every spin so the luckier players can benefit from lots of free spins.