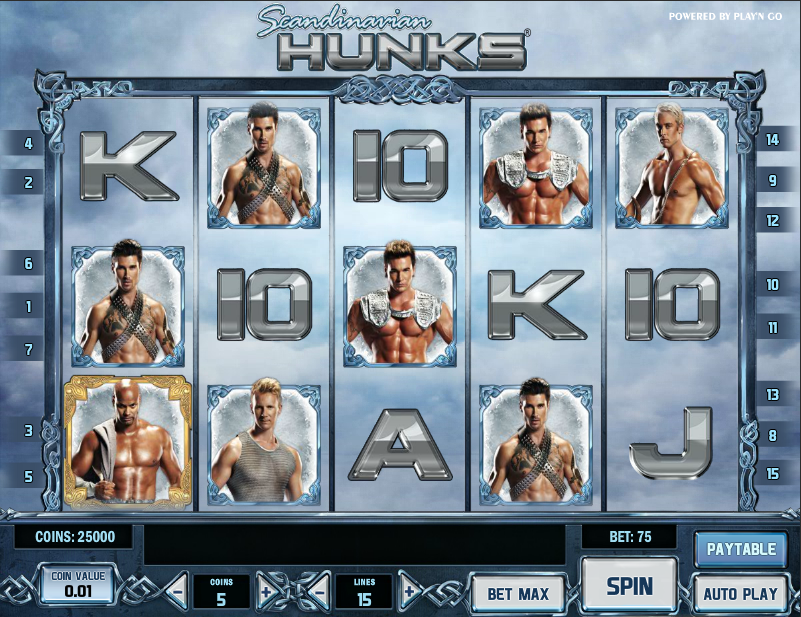 You may well have read our recent review of an online slot called Scandinavian Babes and if you have then you’ll know what to expect from Scandinavian Hunks.  Instead of scantily-clad girls gyrating around we have instead a number of well-toned chaps dressed in what can only be described as bizarre outfits. This is definitely a slot for the ladies.

A cloudy background is once again the background to the five reels and fifteen paylines and this slot features the same clean lines and icy feel of it’s sister game.  Four muscle-bound guys make up the four main symbols and a fifth represents the wild symbol.  Playing card icons are the low value symbols.

That wild symbol also triggers the free spins round and the Scandinavian Bonus symbol activates the second bonus feature.

The wild symbol is stacked in this game and if you can land it on reels one and five so that it covers all places you will trigger fifteen free spins.  That’s not a bad start but it gets even better because the wild symbols will remain in place for the duration of the spins, making this a profitable bonus.

Landing three of the Scandinavian Bonus scatter symbols on reels one, three and five will gain you entry to this feature.  Three guys will appear to dance on plinths and all you need to do is click one; he will dance around a bit and then reward you with some cash.  The other two will then reveal what you would have received had you picked them.

For those who like even more gambling, you can wager you most recent win by using the ‘Gamble’ button underneath the reels.  Pick the correct playing card colour to double your winnings or the correct suit to quadruple them.  Once you reach five wins in a row or 2500 coins you’ll be taken back to the base game somewhat richer.

As with the Scandinavian Babes, be careful with the gamble feature and don’t be tempted to keep going for five wins in a row – it’s unlikely to happen.

This is a high-quality game with some clean lines which will appeal to approximately 50% of the demographic.  Three bonus features mean there’s plenty of reasons to keep coming back.