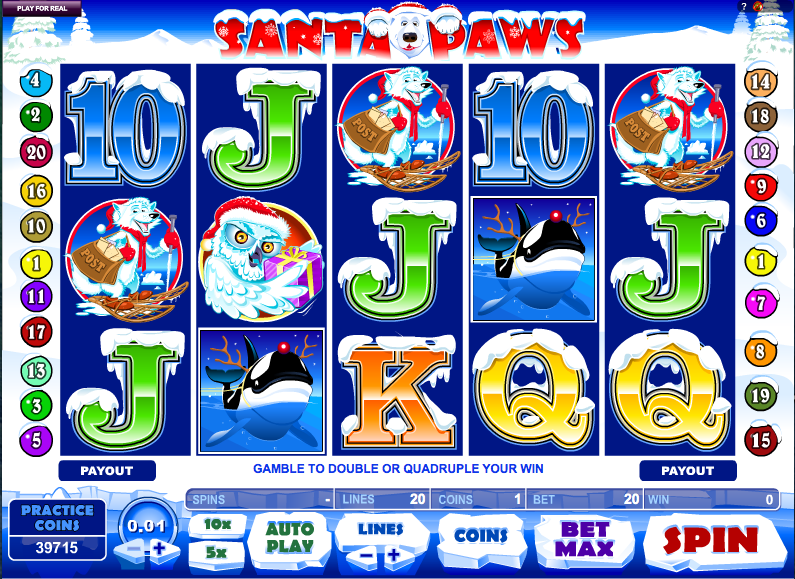 There’s nothing wrong with a seasonal slot and as Christmas approaches it seems as good a time as any to have a good look at Santa Paws, a bright and cheerful online slot machine from Microgaming. It’s all animal-related so the Santa Paws character takes the place of Father Christmas and there’s a veritable cornucopia of other animal participants.

Santa Paws features twenty paylines spread out over five reels and has an appropriately jingly, Christmassy soundtrack; there’s a bright blue sky and deep snow in the background and if you feel the cold easily you may want to put on an extra layer of clothing.

Apart from the standard 10, J, Q, K and A symbols we have the seasonally-attired animals and they include a rabbit, an owl, a seal and a wolf. There’s also Rudolf the whale wild (wearing a pair of novelty antlers), the Santa Paws polar bear wild and then the penguin scatter symbol which activates the free spins.

The gift-carrying penguin is the only scatter symbol in the game and landing three, four or five anywhere on the reels will reward you with 12 free spins.

There’s no multiplier for any wins here but it is possible to trigger another 12 spins by landing more penguins during the feature.

Unusually this slot features two separate wilds and both are active in the base game and the free spins; having two wilds obviously increase your chances of creating winning combos (although it won’t increase the theoretical return to the player).

If you’d like to wager your most recent winnings in an extra game, just click the ‘Gamble’ button underneath the reels to play the card prediction game. Double your winnings by guessing the colour of the next card or quadruple it by picking the correct suit.

An incorrect pick will end the round, as will winning five picks on the trot.

Don’t be tempted to get carried away with the gamble feature; five wins in a row might sound tempting but it’s extremely unlikely. Collect after one or two wins and head back to the base game.

This is fairly standard slot but one which might appeal during the Christmas period; the background music is nice and the cute characters might cheer you up on a gloomy winters day.