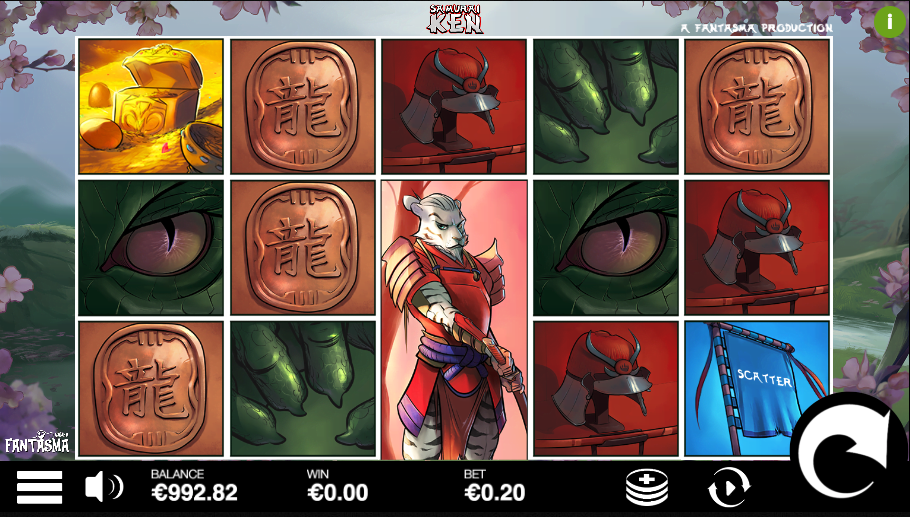 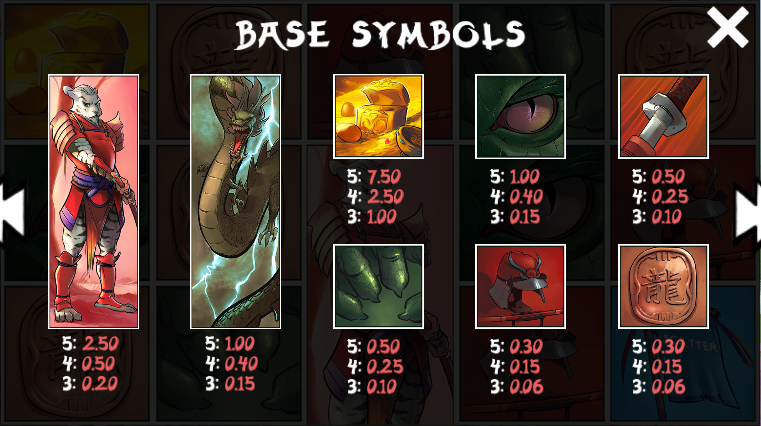 Online slots based on ancient tales of martial arts in the Far East come around every so often but rarely with the quality and style of Samurai Ken, a release from Fantasma Games with a manga influence and some clever bonus features.

Samurai Ken is a five reel slot with three rows and twenty fixed paylines; the symbols are displayed in small boxes reminiscent of a comic book and the backdrop is one of hazy fields, streams and Lotus blossom.

All the symbols are related to the theme and include Ken, the dragon (these can both be three symbol positions high), a pile of treasure, the dragon’s eye, Ken’s sword, the dragon’s claws, Ken’s helmet and an inscription.

The wild is a red and black affair, it appears only during the free spins feature and it will replace all others to form winning combinations except for the flag scatter symbol.

This occurs on any winning spin and those symbols involved will freeze in place while the reels spin again – any additional matching symbols which contribute to the combo will award a further spin and so on until there are no more, at which point any wins are evaluated.

This is triggered by landing three of the blue flag scatter symbols anywhere on reels one, three and five and the screen will change to show the set of reels with Ken on the left and the dragon on the right. The number of spins is unlimited but on each spin either Ken or the dragon will strike, moving the meter above the reels to the left or right – when it reaches one side the round is over. The wild symbol turns up during this round and acts like a normal wild.

Samurai Ken is a great looking slot with some atmospheric graphics and a significant nod towards 1990s manga cartoons; there are some decent wins to be had with the Sticky Wins but we somehow managed to trigger the free spins and win nothing. This game comes with an RTP of 96.35%.