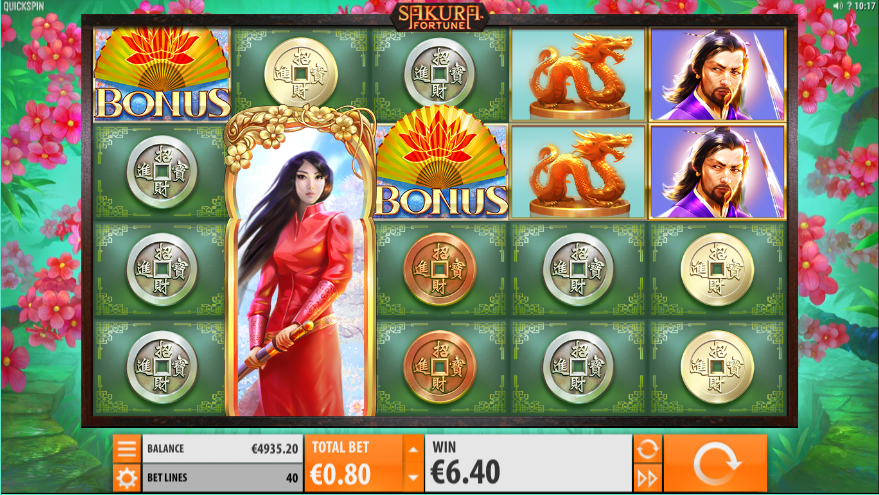 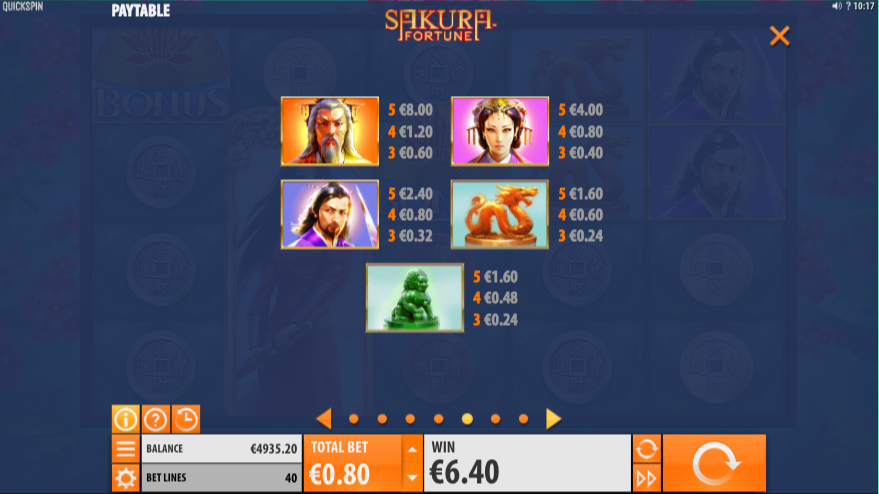 It’s time once more to journey to the mysterious Orient to check out this online slot from Quickspin which follows the journey of a Japanese princess as she ‘battles evil emperors on her way to untold riches‘. It’s called Sakura Fortune and it’s an oriental-themed game with some stunning graphics and three different bonus features.

Sakura Fortune is a five reel slot with four rows and forty fixed paylines; there’s a Japanese neatness to the design of the reels which themselves are set against a backdrop of pink blossom trees around a brick-lined pond.

The higher value symbols are three characters from this fantastical story, a golden dragon and a jade lion; the lower values are four traditional coins of different colours.

The princess is the wild symbol and she can appear stacked to cover all positions on that particular reel; she only appears on reels two, three and four and will substitute for all other symbols to help form winning combinations. There’s also a fan bonus/scatter symbol which is the key to one of the features.

This is triggered by landing two full stacks of the princess wild symbols on reels two, three or four; you will now receive two free spins with those wilds frozen in place but more spins will be granted if more wilds land.

Whenever two wild symbols land in the base game there’s a chance that they will nudge into full stacks and trigger this feature.

Trigger this by landing three or more of the fan scatter icons in adjacent rows starting from the left hand side; you’ll initially be awarded seven free spins but each wild princess which lands will award an extra spin. Additionally those wilds will expand to fill the entire reel so there are some big wins to be had here for the luckier players.

Sakura Fortune is a lovely looking slot with some captivating gameplay and perfectly judged sound effects; the features are engaging and this game comes with an RTP of 95.58%. Highly recommended!