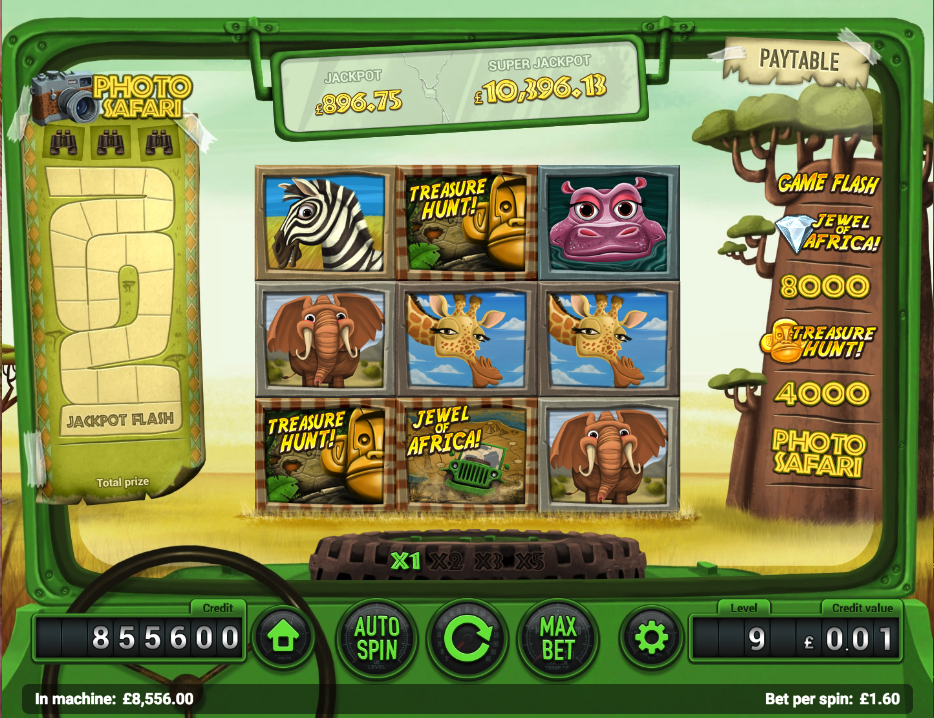 The plains of Africa are our destination now as we check out this online slot from Magnet Gaming; it’s called Safari and like other games from this developer it comes with some very in-depth bonus features and two progressive jackpots.

Safari is a three reel slot with three rows and just eight paylines; we’re peering at the reels and symbols through the windscreen of a safari jeep and the dashboard of this vehicle contains all the controls necessary to play the game.

The symbols are all safari animals and include lions, elephants, hippos, rhinos, giraffes, zebras and toucans.

There are no wild symbols in Safari but there are four bonus symbols – Photo Safari, Treasure Hunt, Jewel of Africa and Game Flash.

Symbols involved in a a winning combinations will disappear to be replaced by more falling in from above and the chance to create more wins – the multiplier value shown below the reels increase by 1x with each successive drop and win.

Trigger this with three Game Flash symbols on an active payline and you’ll receive a random prize which could be entry into one of the bonus games of the Jackpot Flash game.

This is triggered by landing three of the Photo Safari symbols on an active payline or via Game Flash; you’ll now get 35 free spins in which to spot the animals at the top of the map on the left hand side and each time you do the little explorer will move one place along the trail. Reaching the binocular sign will move to the next animal and the previous one will become a scatter and payout accordingly. Make it all the way to the end to play the Jackpot Flash game.

This is triggered by landing three of the Treasure Hunt symbols on an active payline or via the Game Flash; this is a picking game in which you must pick your way across a map and try to find the six idol pieces which will gain entry into the Jackpot Flash game. Making progress along the trail under the map will award greater prizes as you go.

Trigger this by landing three of the Jewel of Africa symbols on an active payline or via the Game Flash; a map of Africa will now appear covered with trails and yellow and blue question marks. You’ll receive 12 dice rolls and must land exactly on a question mark to win a prize, jewels or extra rolls for the blue ones. Collecting enough jewels will gain entrance to the Super Jackpot Flash game.

The Jackpot Flash game can be triggered from the bonus games or via Game Flash while Super Jackpot Flash can only be activated from the Jewel of Africa game. They are similar features in which a flashing light will move around and stop on a credit prize or the jackpot or super jackpot (shown above the reels) depending which game you’re in.

Safari may only have three reels but, like other Magnet releases, it’s a slot which packs in an extraordinary amount of bonus games, blurring the line between slots and video games – it even adds cascading reels for some extra fun. This game comes with an RTP of 96.50%.