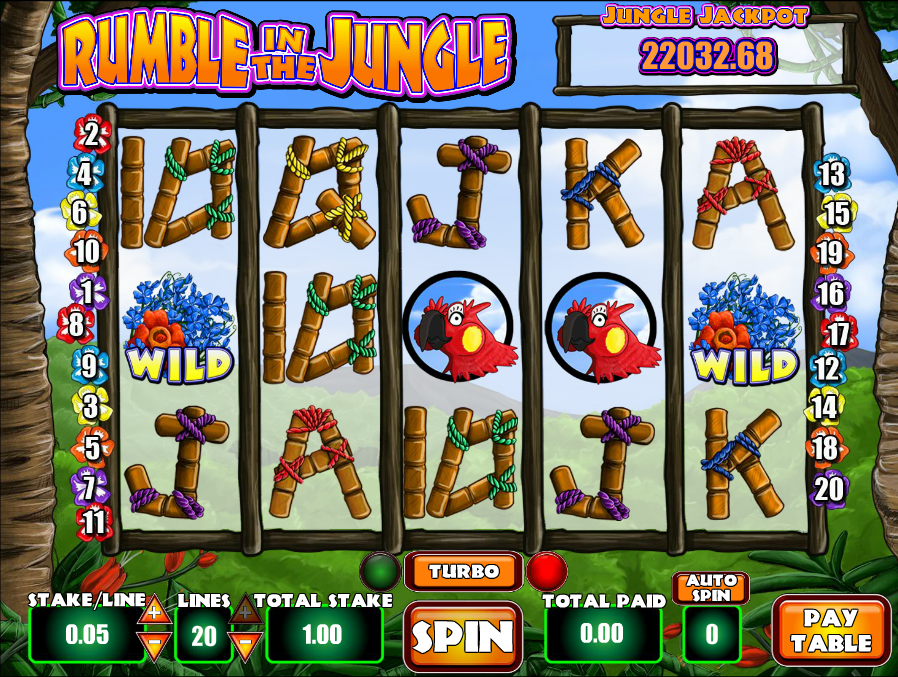 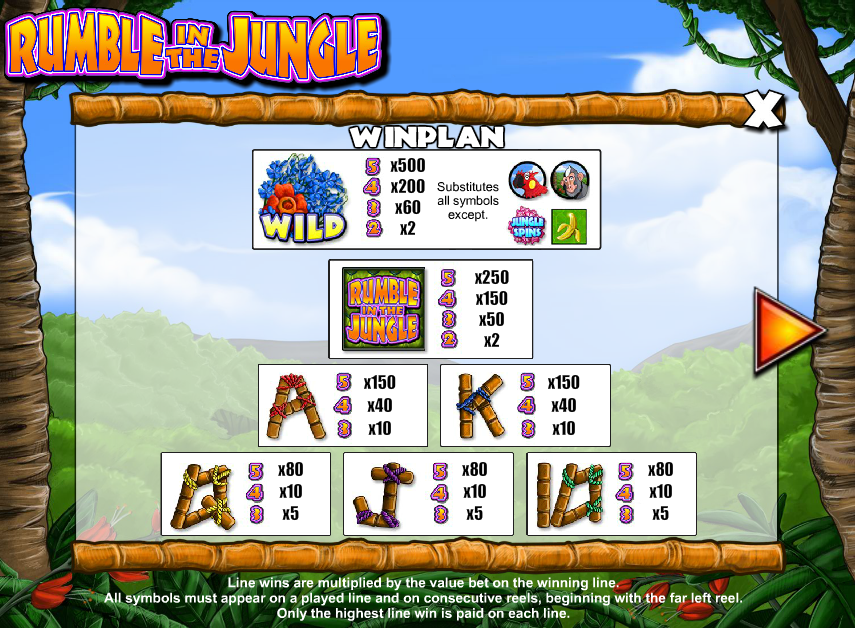 The original Rumble In the Jungle has been described as the greatest posting event of the 20th century ; it pitted Muhammad Ali against George Foreman in Zaire in October 1974. This online slot from Mazooma Interactive doesn’t have quite the same historical significance but it does have several separate bonus features and a progressive jackpot.

Rumble In The Jungle is a five reels slot with four rows and twenty paylines. There’s an appropriately jungly background with trees framing the proceedings and reels constructed from wood.

There are only six base game symbols and five of those are 10, J, Q, K and A (fashioned out of pieces of wood); the other is the Rumble In The Jungle logo.

There are lots of special symbols though including the blue flower wild and three scatters – the monkey, the parrot and the Jungle Spins logo.

This is our favourite feature and you will need to land three or more of the money symbols anywhere in view to trigger it. You will now get to play a three reel slot in which the symbols which land will count towards increasing the multiplier for this round.

Each symbol which lands will partially fill up one of the spaces above; reel one symbols only apply to column one, reel two to column two and so on. When a particular multiplier is full it will be applied and then cleared.

Once you’ve landed three rotten bananas in total the round is over; check out the video above to see this in action.

The Jungle Spins logo is stacked and so you will need to land three on reels two, three and four to trigger this feature. You will receive five free spins on a different set of reels.

Trigger this bonus by landing three or more of the scatter symbols anywhere in view; a number of parrots will now fly into view (the same number as the triggering symbols) and all you have to do is pick one for a cash prize.

The progressive jackpot can be one in two ways:

This seems to be some sort of hidden feature and it can randomly help you out by turning a reel (after they’ve stopped spinning) to fins a third scatter symbol.

It may not have the excitement of Ali vs Foreman but for a slot machine it’s definitely one of the better ones; you can’t go too far wrong with loads of bonus features and a progressive jackpot.